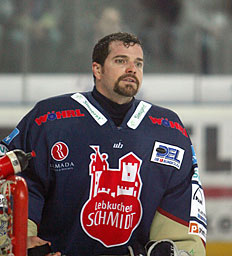 Labbe, from Sherbrooke, Quebec, spent his career in the American Hockey League.  He was undrafted out of junior hockey and played his first AHL game with the Prince Edward Island Senators.  He won 25 games with the Cornwall Aces, leading them to a major win over the Albany Devils, one of the biggest wins in Calder Cup history.

With the Hershey Bears in 1996-97, Labbe earned the "Baz" Bastien Award as the league's top goaltender and the Les Cunningham Award as most valuable player.  He and the Bears won the Cup in 1997.

With the Hartford Wolf Pack, he earned his second career Harry Holmes Award for team goaltender.  He also became the fifth goalie in AHL history to score a goal.  He also won a Cup with the Wolf Pack.

In 2016, Labbe was inducted into the American Hockey League Hall of Fame.