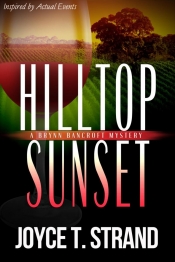 December 24, 2014 (San Diego’s East County) - Hilltop Sunset: A Brynn Bancroft Mystery, by Joyce T. Strand, reads like a John Grisham or Robert Ludlum book. It has all the elements of intrigue, romance and suspense that we have gotten accustomed to from these noted authors and icons of literary fiction. As they are master storytellers, we find similar traits in Strand’s well-written book. 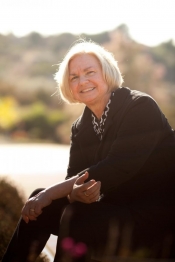 Inspiration for the Brynn Bancroft mysteries actually comes from relevant California cases. Strand drew the criminal plot for Hilltop Sunset from a crime committed in the mid-1980s by an executive at Nabisco Brands Inc., Sally L. Hasper, who managed to embezzle millions of dollars from the company. This particular case was suggested by Ed Kirkley, FBI Supervisory Special Agent, retired.

The author, much like her fictional character, Jillian Hillcrest, actually served as head of corporate communications at several biotech and high-tech companies in Silicon Valley for more than 25 years. Unlike Jillian and Brynn, however, she did not encounter any murders. Murder and corporate espionage is an essential element in this book, along with romance and infidelity, as it is in the books of Grisham and Ludlum. Strand weaves her 25 years of experience in corporate communications rather well in the telling of this story. 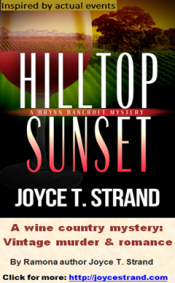 This is a mystery set in wine country pitting financial exec Brynn Bancroft against a determined stalker, a troubled love interest, and career clashes. Bancroft learns that a former employee who beat her nearly to death has returned to stalk her and her friend, Jillian Hillcrest, also a former victim. Recently divorced, Brynn turns to a new love interest only to encounter additional unwelcome issues. Meanwhile, short-timer Brynn, who has resigned from her Silicon Valley company, becomes bored fulfilling her remaining responsibilities there. She begins to prefer supporting the launch of her ex-husband’s new hilltop winery while waiting to move to her next position. Between her stalker and her new love interest. Brynn faces a series of life-changing events.

Curious, is the portrayal of Brynn and others as unabashed bed hoppers, throughout their respective marriages. I tried to not read that much into it, viewing it as literary license of fictional authors, and not necessarily something more subliminal. This is just one of the sub-plots in this mystery, which has Brynn having an extra-marital affair with the owner of the company that she works for, among many other acts of infidelity, while her own husband being engaged in similar acts. Perhaps this is a voyeuristic aspect of the story designed to embellish the overall intrigue and mystery, which includes acts of murder and violence.

Throughout this scintillating mystery thriller we find Bancroft continually looking over her shoulders for the woman who had beaten her, Isabel, who had left deep physical and emotional bruises on her. There were sightings of Isabel in California. Being a bit nervous and gun shy, Bancroft found herself mistaking and confusing total strangers with this woman that had caused so much angst and anxiety in her life. Understandably, this made it difficult for her to fully relax and enjoy her life. An FBI agent, who was actually on vacation, spotted Isabel in a large group of Canadian tourists in Yosemite. To complicate matters, Brynn found herself transitioning from a divorce with the husband that she still maintained a business relationship with, in running a winery, and leaving the company that she worked for to another, due to the suggestion and encouragement of the wife of the CEO of the company, after the wife had detected that Brynn had been having an affair with her husband. The plot thickens!

In a strange twist of fate to this story with a number of subplots, it turns out that Brynn’s new boyfriend Todd’s ex-wife, Angela, was killed by the same Isabel that had earlier beaten up Brynn and Jillian, and terrorized a wine tasting party arranged by Brynn and her ex-husband Liam. This book has everything, including a spine tingling conclusion. There is an FBI involvement that adds to the intensity of the story, with Isabel commanding the attention of the highest levels of law enforcement. 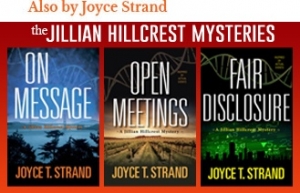 As with most mysteries, there is usually a surprise ending or climax. It is no different with Hilltop Sunset, as the numerous interactions between characters in this story, and subplots, converges into a spellbinding climax. Typical Grisham and Ludlum stuff! This is also symptomatic of The Jillian Hillcrest Mysteries.

Dennis Moore is the Associate Editor for the East County Magazine in San Diego and the book review editor for SDWriteway, an online newsletter for writers in San Diego that has partnered with the East County Magazine, as well as a freelance contributor to EURweb based out of Los Angeles. He can be contacted at contractsagency@gmail.com or you can follow him on Twitter at: @DennisMoore8.