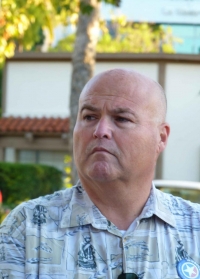 November 5, 2010 (La Mesa) –Jim Wieboldt, a Sheriff’s deputy and founding chairman of the La Mesa Chamber of Commerce, announced Wednesday that he plans to challenge Ruth Sterling for a seat on the La Mesa City Council in 2012.

“Public safety will be my number one priority,” said Wieboldt, who pledged to “ask the tough questions about our crime rate” and get recommendations to reduce crime. 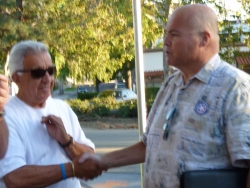 The race is nonpartisan. But Wieboldt, a Republican, drew bipartisan support.

“I think he’s a team player,” said Allen, a Democrat, who added that he believes Wieboldt represents the “soul” of the City. The other councilmembers endorsing Wieboldt are Republicans.

Wieboldt said he won’t be a one-issue candidate. “If there’s trash, I won’t kick it around, I’ll pick it up,” he said in a veiled reference to mayoral candidate Laura Lothian, who drew criticism for piling up trash for a campaign ad. He also pledged not to blog about opponents, vowing to face them in person.

He has, however, blogged about candidates on local news sites, sparking heated debate over issues such as a social host violation at Lothian’s home. He has defended his tactics due to the challenger’s attacks on Mayor Madrid.

Wieboldt said tactics used by some candidates for mayor and council in the 2010 election motivated him to announce his candidacy early. He cited “venomous attacks” waged against elected officials and noted that some candidates alluded to problems on streets that were not in La Mesa, apparently unaware of the city’s boundaries.

“California Fair Political Practice regulations were intentionally violated,” Wiebolt said, an apparent reference to a slate mailer that touted mayoral candidate Laura Lothian and council candidates Ian Schiff and Kevin Rynearson, along with several propositions. Peter Cuthbert, who funded the mailer, has since claimed that he added the propositions without the candidates’ knowledge—a move that pushed it into illegality and could result in up to a $5,000 fine.

Wiebolt, 53, is a graduate of Grossmont High School who has lived in La Mesa for 50 years. He and his wife of 33 years, Kelly, have raised six children, “three of my own and three that we took in,” now all grown.

His community experience includes serving as current Chair of the Parking Commission and Chair of the Events and Calendar Committee for the La Mesa Centennial Project. He also serves on the Property Based Business Improvement District Steering Committee and has been active in the La Mesa Vllage Merchants Association. He was actively involved in supporting Proposition D, the public safety facilities bond, and Proposition L, the sales tax increase, which he believes have helped maintain the quality f life in La Mesa.

He praised passage of Prop 22, which bars the state government from taking money from local government. “It will keep the Legislature from raiding our coffers,” said Wieboldt, who acknowledged that the City’s budget situation is “complicated.” He said the “money is not there” for new expenditures such as increasing compensation but does believe that the City should focus on “showing appreciation for employees.”

Sterling did not respond to ECM’s request for comment. Patrick Dean, who was endorsed by the Democratic Party,    and Schiff, mounted vigorous campaigns but were unable to defeat incumbents Ewin and Arapostathis in November.  Both have previously indicated in other media outlets that they are strongly considering running again in 2012.  Rynearson also left the door open to a future race for Council.