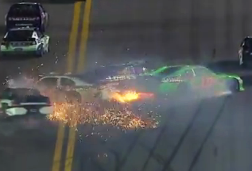 February 27, 2012 (San Diego’s East County)—Five-time NASCAR champion Jimmie Johnson, a hometown hero who grew up in El Cajon and Santee, wiped out on the second lap of the Daytona 500 tonight in a multi-car pileup.

Elliott Sadler hit Johnson’s car from the rear, spinning it into the wall. Other drivers including Danica Patrick, David Ragan, Kuirt Busch and defending champion Trevor Bayne were also involved in the collision. View a video of the dramatic smash-up:   https://www.youtube.com/watch?v=vQb6CJmSyfI&feature=player_embedded

All drivers were able to walk away or drive away from the wreckage.  But the crash leaves Johnson with his worst finish in 53 starts.