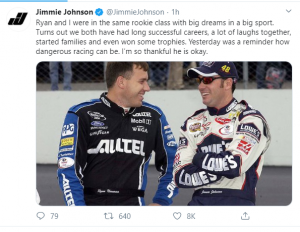 February 18, 2020 (El Cajon) - El Cajon native, NASCAR driver Jimmie Johnson, will race March 1 at Fontana’s Auto Club Speedway even after being sidelined inadvertently by Ryan Newman’s dramatic car crash at the Daytona 500 race on Feb. 16. This will be his last southern Californian appearance.

Ryan Newman, who was hospitalized after the crash, is ‘awake and speaking’ according to WESH Orlando on Feb. 18.  NASCAR provided an update today indicating Newman is in serious condition in the hospital but is awake and talking with his family.

Johnson tweeted a photo of himself with Newman, noting that they were in the same rookie class with “big dreams in a big sport. Turns out we both have had long successful careers, a lot of laughs together, started families and even won some trophies. Yesterday was a reminder how dangerous racing can be. I’m so thankful he is okay.'"

Johnson, announced in Nov  2019 that he would retire from full time racing after the 2020 season. He is a 7-time NASCAR cup series champion and a 6-time Auto Club Speedway winner.

Johnson’s crew tried to repair and continue to finish the Daytona 500 but the time allotted expired. After the multi-car crash his Chevy was parked on the pit road according to a report by Dan Gelston with the Associated Press. 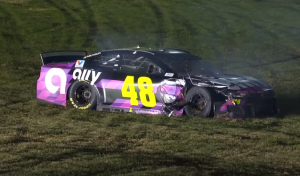 The winner of the Daytona 500 was Denny Hamlin.

Commenting after the Fontana 500 crash that involved or sidelined multiple cars David Talley, the director of communications for Auto Club Speedway, commented Feb. 18 via email:

“Jimmie Johnson will be here at the Auto Club 400 next week.  Fans can purchase tickets to see his last full-time race at his home track by visiting www.autoclubspeedway.com or calling 800-944-7223,” said Talley.

Fans are encouraged to tag their photos #Celebrate48 and share on social media if they attend or have other photos to share of Jimmie Johnson.