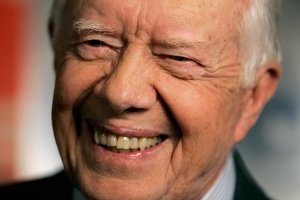 On Sunday, Carter announced to the Sunday school class he was teaching at his church in Plains, Georgia  that a new scan has shown he is now cancer free.

Back in August, doctors found four cancerous melanoma lesions on Carter’s brain, not long after removing a portion of his liver where cancer was also found.  Many believed the prognosis for the 91-year-old former President was grim.

Carter underwent a series of treatments including Ketruda,  a newly approved auto immune drug, Associated Press reports.  He took time off his charitable work at the Carter Center, but earlier this week was back doing interviews at a Habitat for Humanity site, the Los Angeles Times reported.

Jan Williams, one of Carter’s closest friends, said, “It’s like getting the biggest Christmas gift that you could ever want.”  Coming after a week of tragic news around the world, she reflected, “How wonderful in the midst of all this to get such wonderful, encouraging news