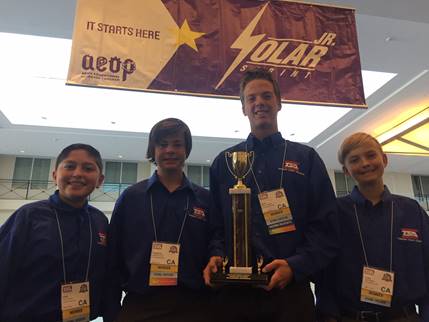 July 16, 2019 (Alpine) -- Joan MacQueen Middle School Engineering students made the Alpine community proud by bringing home another national accolade from the 2019 Jr Solar Sprint held at the Technology Student Association (TSA) convention in Washington, DC. The JMMS team won first place in the sprint racing segment of the competition and finished 2nd out of 94 teams in the overall scoring of the Jr Solar Sprint event. This is the second top three finish for the JMMS Engineering program in the past three years.

During the time trials, Team DAN III recorded the fastest time of the day at 4.4 seconds. “We knew we were going to be fast”, says Chris Loarie, volunteer advisor to the program, “because we recorded a first-ever, sub 5 seconds on our bumpy track at JMMS. We just had to hope that our car would survive the travel and that the weather would hold for 2 days of solar sprinting.” After qualifying for the top 16 semi-finals, 2019 Team DAN III ran straight victories through the double elimination brackets to earn the racing champion crown.

“A top 10 finish is a privilege in any event, and a top 3 finish is a benchmark of an elite program.  Our kids learned a great deal this year and they enjoyed it. We hope to double the JMMS travelling contingent of students from 5 to 10 students next year,” Loarie reports.

JMMS Engineering is expanding in the Fall of 2019.  The program is moving to the library space and creating a “maker space” environment to house the growing scale of projects that JMMS students create.  The new facility will house the first CO2 dragster track in Southern California. In the opened up space, the kids will computer design balsa dragsters, cut them on a newly acquired 4 axis cutting machine, and race them on a dedicated 20M sprint track. “It is an exciting time to be in Alpine and attend JMMS”, says Alpine Union School District Superintendent Rich Newman.