August 23, 2020  -- In the first Democratic National Convention held remotely due to the coronavirus, former Vice President Joe Biden accepted the nomination in a powerful speech in which he promised to unite and heal America.

He also pledged to provide leadership to address ”four historic crises” facing our nation:  the worst pandemic in over 100 years: the worst economic crisis since the Great Depressing, the strongest calls for racial justice since the ‘60s, and the  accelerating threat of climate change.

“If you entrust me with the presidency, I will draw om the best of us not the worst. I will be an ally of the light, not the darkness.  It’s time for us, we the people, to come together,” said Biden, speaking from Deleware, his home state.

Biden, who lost his wife and daughter in a car accident and later, his son, Beau, an Iraq War veteran to brain cancer, told Americans, “I understand how hard it is to have any hope right now.” He said those trials have taught him that loved ones “never leave your heart” adding, I found the best way through pain and loss and grief is to find purpose.” In  his heartfelt and gaffe-free speech, he laid out specifics of his vision for America if elected.

His first priority will be a national strategy to bring the coronavirus under control including rapid tests with immediate results, medical supplies and protective equipment made in the U.S., resources to help schools open safely, and taking a “muzzle” off medical experts to provide the public with the “honest, unvarnished truth.”

He promised to rebuild America’s economy and make it better with 5 million new manufacturing and tech jobs, modernized roads, bridges, broadband and more, a health are system that lowers premiums, deductibles and drug prices by building on the Affordable Care Act, equal pay for women, making college more affordable, immigration reforms that reflect “our values”, ending tax loopholes for the wealthiest 1%, for pay for his programs, addressing climate change, and protecting Medicare and Social Security, which Trump is undermining by proposing to eliminate a payroll deduction tax that pays for almost have of Social Security. 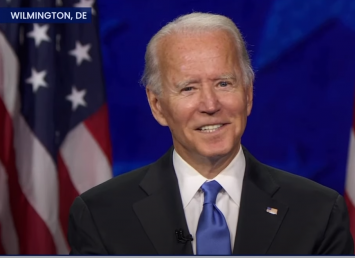 If nothing is done, Biden said, more Americans will die of the virus, many mom and pop businesses will close for good, funding for Medicare and Social Security will be undercut and the Affordable Care Act will be dismantled.

He laid blame for many of those issues on President Donald Trump’s actions and inaction, stating, “Our current president has failed in his most basic duty to the nation. He’s failed to protect us.”

He spoke of winning the election for the “workers who keep this country going” and for “communities who have known the injustice of the `knee on the neck.’ For all the young people who have known only an America of rising inequity and shrinking opportunity…American is an inflection point. A time of real peril” but also “of extraordinary possibilities.”

Biden called for a chance to help the nation “heal, to be reborn, to unite. A path of hope and light.”

He criticized Trump for fanning flames of hatred and division, as when the President praised “Nazis and Klansmen” marching in Charlottesvile who were “spewing the same anti-Semiticism heard in Europe in the ‘30s.”  He called that moment a”wakeup call” that compelled him to run for the presidency, stating, My father taught us that silence was in a complicity..” He called this election a battle for the soul of America.

He also pledged a change in foreign policy. “I will be a president who will stand with our allies and friends…the days of cozying up to dictators are over. Under President Biden, American will not turn a blind eye to Russian bounties on the heads of American soldiers,” a reference to recent revelations that  Russian President Vladimir Putin paid for the murder of U.S. troops in Afghanistan.

Biden called for racial justice and praised his vice presidential nominee, California Senator Kamala Harris as a “powerful voice for this nation  Her story is the American story.  She knows about all the obstacles thrown in the way of so many in our country” as a woman and daughter of Black and South Asian immigrants.

Biden also praised his wife, Jill, an educator and mom.” He said she would be a “great First Lady” because “she loves this country so very much.”

He also spoke movingly of meeting 6-year-old Gianna Floyd, whose father, George Floyd, was brutally killed by a Minneapolis police officer, sparking protests across the nation.  “Daddy changed the world,” the little girl told Biden, who voice hope that the vision of the late Congressman Lewis for America to finally be ready to lay down “the heavy burdens of hate at last” and root our systemic racism.

“I will stand always for our values of human rights and dignity. And I will work in common purpose for a more secure, peaceful, and prosperous world,” said Biden, who pledged his belief that “Everyone, and I mean everyone, should be given the opportunity to go as far as their dreams and God-given ability will take them.”

He concluded, “In times as challenging as these, I believe there is only on way forward. As a United America. United in our pursuit of a more perfect union. United in our dreams of a better future for us and for our children. United in our determination to make the coming years bright.”

View video of the speech:  https://www.youtube.com/watch?v=pnmQr0WfSvo

View other speeches from the convention: