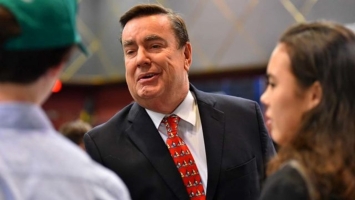 Photo by Chris Stone: Republican Joel Anderson returns to office after stints in the state Legislature.

“I am grateful to have earned the trust and support of the residents of East County to represent them on the county Board of Supervisors,” said District 2 winner Anderson. “I also want to recognize Supervisor Dianne Jacob, the longest-serving county supervisor, for 28 years of dedicated service to East County.”

Anderson added: “I am looking forward to working with all of my new board colleagues in addressing the myriad of issues impacting the 2nd District and all of San Diego County.”

In other close East County races, Dustin Trotter eked out a five-vote victory over Samm Hurst in the race Santee City Council District 4 and Greg Shibley bested April Leon by seven votes to win a seat on the Lemon Grove school board.

The “official final results” posted by the Registrar of Voters showed a countywide turnout of 83.5%.

In competitive races for Congress, Sara Jacobs defeated fellow Democrat Georgette Gomez 59.5% to 40.50% in the 53rd District to replace Rep. Susan Davis, and Republican Darrell Issa returned to the House with a 53.7% to 46.3% victory over Democrat Ammar Campa-Najjar in the 50th District formerly represented by Duncan L. Hunter and son Duncan D. Hunter for decades.