Self-defense tactics helped first victim escape; learn how you can fight back if assaulted 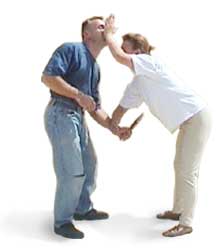 March 1, 2010 (Rancho Bernardo) – Fighting back may have saved the life of a woman attacked by John Gardner, the convicted sex offender now under arrest for suspected rape and murder in the case of missing Poway High School teen Chelsea King. (The search for King continues; Sheriff Gore has stated he still holds out hope that she may be found alive)

How did Moncayo escape from Gardner--and what should you do if you are ever attacked?

According to an account written by Moncayo’s sister for the Silver Spur, a Rancho Bernardo High School paper, Moncayo was tackled while running through the park and thrown to the ground. The attacker demanded money, then “picked her up by her shoulders, shaking her relentlessly, which left bruises,” when told that she had no money. Moncayo, who had training in martial arts, fought back by elbowing her attacker in the nose. The move stunned him long enough for her to escape.

Moncayo’s choice to fight back may well have saved her life.

A woman is raped every 46 seconds in America. Most (75%) of rapes are committed by a man known by the victim. A substantial number (25%) of all rapes occur in a public area or parking garage

Fighting back is not without risk.  But passively submitting to an attack is no guarantee of survival, since a rapist may decide not to leave a witness alive.

How can you protect yourself from a violent attack?

Start by avoiding potentially dangerous situations, such as running or walking alone after dark or in an isolated place. Take a companion or a dog. Carry an alarm and common items that can be used for self defense. Aerosol spray, coins thrown at the eyes, jamming a lipstick tube, jabbing with keys, tossing rocks or flinging sand into eyes can help protect you if you are attacked.

You can learn common threat positions and self-defense moves to counter them through self-defense class or free online self defense sites such as www.safetyforwomen.com or www.selfdefense-4-women.com. The author of Safety for Women reports that she warded off an attacked by slamming her palm against his nose.

An elbow jab, such as Moncayo used, can be effective if someone is against your back trying to grab your waist, the SelfDefesne4-Women site advises. To make an elbow strike most effective, make a fist, grab it with your other hand, then jab with the elbow on the same arm as your fist. Use your entire torso to “throw” your elbow, twisting at the waist and pivoting your shoulders as you strike. If your attacker is large, throw your elbow straight back to strike his ribs or stomach. If he’s close to your size, jab back and up to hit his head, face or throat.

These sites offer many other defense techniques, such as kicking in the knees or groin, attacking pressure points, or using TaeKwonDo hand and foot moves.

If you’re grabbed from behind around your throat, grab your attackers pinky fingers and yank down hard enough to break them. You can use your fingers to pull hair or ears, twist fingers, or use a palm thrust to the throat or nose.

The websites listed above also have links for ordering self-defense devices such as pepper spray, tasers, Kabuton keychains (sharp devices which may be used to disable an assailant) and even a stun gun disguised as a cell phone. Check with your local jurisdiction on the legality of any self-defense device before making a purchase.