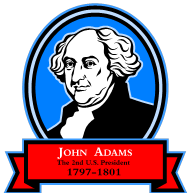 The award-winning series stars Paul Giamatti and Laura Linney as John and Abigail Adams and traces their life and times through the American Revolution and Adams' tenure as the nation's second president to their deaths. Produced by Tom Hanks, directed by Tom Hooper and based on David McCullough's Pulitzer Prize-winning biography of Adams, the series is noted for its historical authenticity, stirring characterizations and epic scale.


The series had a limited release on HBO and was missed by many people. The Historical Society urges everyone to take advantage of this opportunity to view "John Adams" on the state-of-the-art screening equipment in the Lemon Grove Library and see at firsthand a top notch, absorbing production.

This film series is suitable for ages 14 and over.