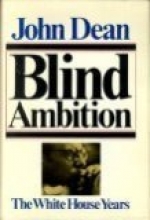 July 10, 2009 (La Mesa) – John Dean, the former White House lawyer under President Richard Nixon during the Watergate scandal, will speak August 5th at the La Mesa Community Center. The event, co-sponsored by the Eastlake--Bonita Democratic Club and La Mesa–Foothills Democratic Club, is free and open to all people.

Dean’s publisher will be issuing an updated version of Dean’s book about the Watergate scandal, “Blind Ambition: The End of the Story” on July 21. This new printing includes an afterword that will provide new revelations and details that answer the most persistent questions lingering since the original investigation.

Dean recently made headlines when controversy and crowds surrounded his appearance in June at the Richard Nixon Presidential Library. Dean, formerly a conservative Republican, has also been outspoken in his criticism of President George W. Bush, whom he has called “worst than Nixon.”

Social networking for the August 5th event begins at 6:30 p.m., with the program starting at 7 p.m. The La Mesa Community Center is located at 4975 Memorial Drive in La Mesa.