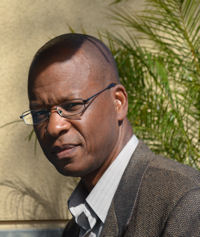 By Nadin Abbott
“Vote your passion, not your fears.” -- John L. Brooks motto
May 14, 2012 (San Diego)—Updated May 17, 2012 --John Brooks has set his sights on the 51st Congressional seat held by Bob Filner. He is running against Denise Moreno Ducheny and Juan Vargas on the Democratic side. Why is he running? He was inspired by the Occupy Wall Street movement, and knew that the next step was to step to the plate and run for office.

Occupy Wall Street wants changes in our political system that benefit the “99 percent.” Now that Filner is retiring to run for Mayor, Brooks saw this as not just an opportunity, but a calling. Brooks is a 30 year veteran of the U.S. Department of Fish and Wildlife, where he served over the last 14 years in the Imperial\ San Diego region. He has lived a life of public service and believes in it.

A retired member of law enforcement, he marched with Occupy San Diego in the early days. He believes the Occupy movement has “served its purpose and raised consciousness.” He added that the Tea Party needs to get some credit too, since it also pointed up the popular anger. He also knew that he “wanted to be the change you want to be,” paraphrasing Mahatma Gandhi.
He is also different from his opponents, since he is not a career politician playing the game of musical chairs that he says can sometimes lead to losing touch with the base.
When asked about compromise, Brooks explained that he was for the old-style of compromise, where both sides crossed party lines to pass bills that will benefit the community.  He denounced the current partisan gridlock.
Brooks said that there are also common sense points of agreement as humans. “Among them clean air, clean water and good education.” This is the kind of compromise that needs to be worked on. He also emphasized that he did not mind where good ideas come from. “If a good idea is a good idea, it should be used to get things moving” in a positive direction.
Economy and Education

After the President stated that he was in favor of marriage for the LGBT community I asked if Brooks supports the President’s statement.
Brooks supports same-sex marriage. "Everybody should have the rights everybody else has,” he stated.  He also said that “There are other cultures out there. One religion does not have a right to dictate to other cultures.”
For more information, visit his website at: http://www.brooksforcongress.org