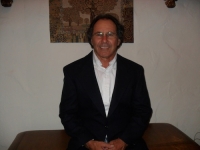 October 16, 2012 (Spring Valley)- Civil engineer John Revels is running for the San Miguel Fire Board. In an exclusive interview with East County Magazine, he shared his views on his candidacy and the future of the fire district.

Revels was motivated to run because, “I got a flyer of what was going on at San Miguel fire board. I have nothing against Cal Fire; they are a great organization. I wanted to keep San Miguel independent as it’s always been [before the merger with Cal Fire]. So a year ago, I started attending meetings and talking to people, and I also went to meetings to speak to the board at Cuyamaca College.”

If elected, his values and budget priorities will be, “First, how the district with Cal Fire will work out.” He wants to assure that the district has stability after turning over firefighting services to Cal-Fire due to budget constraints. “Then, we call for feedback from the community to see if they want to opt out of Cal Fire and go back to the original. That’s what Crest Community wanted.”  Crest had previously opted to join the San Miguel District and stay independent of Cal Fire, he recalled.

I disagree with what they did when they joined with Cal Fire,” he said of the current board. “They didn’t give the community any option. If they would’ve done a community vote, I would’ve been happy, but they didn’t. I also disagree with the fact that you only have to work with San Miguel for five years to become vested to where you will draw a retirement.”

On the outsourcing to Cal Fire, he added, “I think the community at large should make that decision. My personal preference is to go back to San Miguel’s independence. I want to be able to have the opportunity to bring that choice to all the voters.”

Since there have been major fires in East County, there’s been the question of whether residents are really safe, and if there would be any improvement in the safety. Revels believes, “That’s a hard question. I think they’re safe. However, we’ve had major fires. I can’t blame the fires on fire services. But you don’t know what Cal Fire will do with its employees now. As a citizen, I would like somebody to explain that to me.”

He also wants readers to know, “I feel that it’s important that board members are represented more from the community group than in the past. Last year, at board meetings, a lot of people had great ideas, like retired fire chiefs. A stronger community input would be important, so someone can create balance when making the decision.”

Asked about his qualifications, Revels replied, “I’m a professional civil engineer, I’ve been around business, and money.”  He believes his ability to analyze issues and make decisions are needed on the board. Revels has lived in East County for 14 years; he and his wife have four kids.