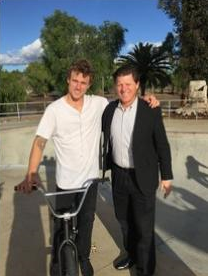 Lakeside’s skatepark was built to provide a safe place for youths to skate safely. Before, skateboarders used busy public streets, parking lots and other places to skate, sometimes causing property damage. However, demand was found to include other wheeled, non-motorized recreational devices, so AB 1146 was introduced to expand access, while also granting local governments immunity from liability for these activities at civic-run skate parks.

Assemblyman Jones posted on his Facebook page, “I appreciate the help from Supervisor Dianne Jacob, Terry Burke-Eiserling of Lakeside Skatepark, and Michael Turko of KUSI for bringing awareness to this issue.”

Motorized devices, such as hoverboards, remain prohibited at skateparks in California.