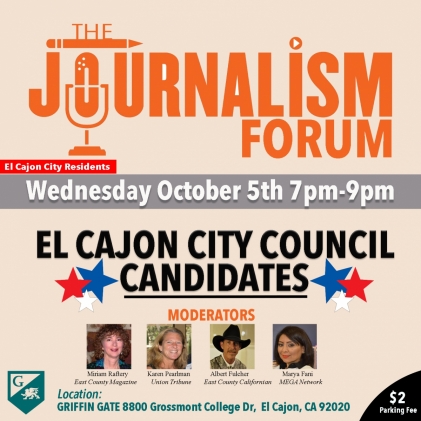 October 5, 2016  (El Cajon) –El Cajon residents are invited to attend a Journalism  Forum featuring candidates running for the  El Cajon City Council.  The forum, co-moderated by journalists from four major media outlets, will be held on Wednesday, October 5 from 7 to 9 p.m. at Grossmont College at Griffin Gate in Griffin Center. (See map.)

Bring your questions, meet the candidates and hear their ideas and goals for El Cajon.

Ten candidates are running for three seats on the El Cajon City Council, including a vacant seat due to Councilman Tony Ambrose not seeking reelection. All  candidates have been invited to participate.

Incumbents Bob McClellan andStarBales have indicated they will be out of town. Paul Circo said he has a schedule conflict. All three are endorsed by the Lincoln Club conservative business group.

This is your opportunity to hear from the candidates,  ask questions about issues that matter most to you, and learn more about those seeking to represent you.

Steve Goble plans to ask the County of San Diego for additional help in handling the homeless and/or mentally ill. Paul Circo generally supports issuing Conditional Use Permits (CUPs) for homeless shelters and services to allow them to locate in El Cajon, and opposes building the animal shelter for another year or two. Stephanie Harper supports issuing CUPs for cannabis, while Humbert Cabrera, Circo and Goble oppose them. You can learn more about nine of the ten candidates running for the three El Cajon City Council seats in their ballot statements This might be the last year El Cajon voters get three votes for City Council, if at large voting is eliminated on November 8, 2016.