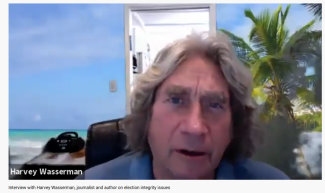 November 20, 2020 (San Diego)—ECM interviewed Harvey Wasserman earlier this week for our radio show aired on KNSJ.  Wasserman is a journalist, historian and author of numerous books and articles on election integrity.

ECM editor Miriam Raftery, who has won awards for her own reporting on election integrity issues, spoke with Wasserman about issues in the 2020 presidential election including documented efforts to suppress votes, the Georgia recount, and the upcoming Georgia run-off elections in January 2021 that could determine the balance of power in the U.S. Senate.

“This will be the most thoroughly and intelligently scrutinized election in American history because you now have an army of aware election protection activists who are all going to pour into Georgia,” he predicts.

But he notes, there is “always a curveball in every election.” In Georgia’s upcoming special elections, construction of two controversial nuclear power plants are also on the ballot effectively in down ballot races for the Public Service Commission, which could impact turnout as well for the Senate races. “These are literally the last nuclear power plants that would be built in the United States.”