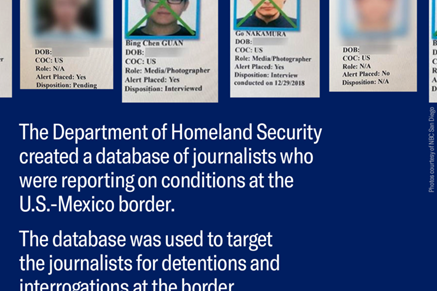 Government created secret dossier on journalists, interrogated them at border for information on sources and reporting

November 21, 2019 (San Diego) -- Five journalists who were tracked, detained, and interrogated by the Department of Homeland Security in an unprecedented, coordinated attack on the freedom of the press are suing to defend the First Amendment. The journalists were all reporting on conditions at the U.S.-Mexico border. On multiple separate occasions in 2018 and 2019, U.S. border officers targeted the journalists for secondary screening at the border, compelled them to disclose information about their sources and observations as journalists, and even searched through their photos and notes.

“A core principle of our democracy is the freedom of the press. That freedom is imperiled when the government uses the pretext of border screening to interrogate journalists who were simply doing their jobs,” said Esha Bhandari, staff attorney with ACLU’s Speech, Privacy, and Technology Project.

The lawsuit argues that the government’s actions violated the First Amendment, chilling journalists from conducting constitutionally-protected newsgathering and reporting out of fear of being detained and questioned about their journalism work. It also asks the court to order the government to delete all records it obtained through the unlawful interrogations.

The five plaintiffs — Bing Guan, Go Nakamura, Mark Abramson, Kitra Cahana, and Ariana Drehsler — are all U.S. citizens and professional photojournalists. They were identified in a secret government database leaked to NBC San Diego in March 2019. The database included their headshots and personal information, including name, date of birth, occupation, and whether they had already been interrogated. Three of the headshots were crossed out with a bold ‘X.’ A fourth, which was not crossed out, warned, “Pending Encounter,” below it.

"When I saw my photo crossed out in a secret government database, I realized the secondary screening and interrogation wasn’t random. I was being targeted by my own government for reporting on conditions at the border," said Bing Guan.

One of the journalists in the case was also denied entry to Mexico during the time period of the interrogations, preventing her from continuing her work there.

“As a freelance photojournalist covering news and various issues, I want to know that I am free to work without government interference,” said Mark Abramson.

Despite knowing that the plaintiffs were members of the media, border officers interrogated all five about their work, asking questions about their reporting and about their knowledge of individuals they may have interacted with while working. A few journalists were presented with a book of headshots and asked to identify any “instigators” they recognized. Another was asked about her past coverage of conflict zones in the Middle East. There was also apparent coordination between the U.S. government and Mexican authorities to track the journalists’ movements while they were reporting at the southern border.

“Journalists are democracy's first line of defense,” said Kitra Cahana. “We need to be able to work without fear of being put on a secret government surveillance list or having alerts placed upon our passports. This interference effectively prevented me and other journalists from carrying out our reporting at the U.S.-Mexico border. It’s an issue that should concern everyone.”

Border officers required some of the journalists to show photographs they had taken of migrants and other people on the Mexican side of the U.S. border. One officer took pictures, using a cell phone, of one journalist’s photographs.

The Society of Professional Journalists San Diego chapter has issued a statement which read reads in part:  "The San Diego Pro Chapter of the Society of Professional Journalists applauds the ACLU for taking on this isue and asks the public for its support in ensuring this intimidating behaivor stops. Journalists are not informants or intelligence agents for the U.S. government. These tactics are common in dictatorial regimes but have no place in a healthy democracy."

A blog post on the lawsuit is here: https://www.aclu.org/news/civil-liberties/the-u-s-government-tracked-detained-and-interrogated-journalists-were-suing.

The complaint is here: https://www.aclu.org/legal-document/guan-v-dhs-complaint.

This release is here: https://www.aclu.org/press-releases/journalists-sue-federal-government-defend-free-press-aclu-lawsuit.

Another great day for America and those who value and support this great country. Making it greater, on day at a time. Trump’s Latest Judicial Confirmation Flips 11th Circuit Court to GOP-Appointed Majority and yet another win.... California Can’t Force Trump to Release Tax Returns, State Supreme Court Says

trump's fingerprints are all over this action. Disgusting treatment of a press that is supposed to be able to be a check or balance on government power and behavior.