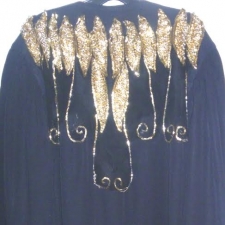 April 25, 2014 (El Cajon  -- The eras from the Babylonian Empire to present-day Iraq will be depicted with the Cuyamaca College staging Wednesday, April 30, of “A Journey to the Sun,” a costume and music showcase and labor of love for Arabic  instructor Aklas Sheai.

More than 40 of Sheai’s students will take the stage from 1-3 p.m. in the Performing Arts Theater, adorned in dozens of her hand-sewn costumes and others that the students provided. The event is free and open to the public. Recorded music and a mostly English script will accompany the performers during the production’s five scenes, taking the audience on a journey starting in 6000 B.C. Babylon and ending with the arrival of Iraqi immigrants in the United States.

“The journey is from the oppression of the past to freedom, thereby showing the journey and the struggle of immigrants for freedom and a better life,” said Raad Jerjis, an associate professor and counselor, and co-coordinator of the production.

A shortened version of the performance was staged last year at a multicultural event in East San Diego heralding World Refugee Day.

Most of the students taking part in Cuyamaca’s performance are Iraqi-Chaldean refugees, immigrants or the children of the Chaldean population. With about 25,000 Iraqis living in San Diego County – a majority of them in East County - the region is the second highest area of residence for Iraqi refugees in the country.

Jerjis said these statistics point to the need for events such as the upcoming production to help others better understand the Chaldean culture and increase awareness of past and current challenges of the refugees and immigrants who left Iraq and now call East County home.

“I would hope that people will gain a greater empathy for the many immigrants who struggle to search for a better life and to promote the perspective of immigrants in general,” said Jerjis, an Iraqi-born Chaldean who came to San Diego in 1982. Starting at Grossmont College, he transferred to San Diego State University and was hired as a Cuyamaca counselor in 2001.

Sheai, who made nearly 40 of the elaborately embroidered costumes over the past two months, said the attire is as historically correct as she could make them.

The audience can also expect Maqam songs and Dabke steps – the music and dancing of Iraq, Sheai said, adding that authenticity is important, since many of her students will be bringing family members to the performance. What began as an end-of-the-semester depiction of Iraqi life – a traditional marketplace, for example – grew into a mini-production that proved so popular that other faculty members began attending, Sheai said. Encouraged, she decided to expand the presentation into a full production, made possible with the help of Cuyamaca College’s Student Affairs Office, Associated Student Government, World Languages Department; and its Diversity, Equity, and Inclusion Committee.