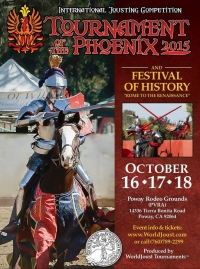 August 22, 2015 (Poway) – Knights, squires and damsels bringing medieval events to life will convert at the Tournament of the Phoenix ™ on October 16-18 at the Poway Rodeo Grounds.

The Tournament of the Phoenix™ is an historically themed event comprised of 3 main parts:

The Tournament features jousting, the original 'extreme' sport, and only the most highly skilled competitors are invited to compete. This year, five knights from the U.S., England, Norway and the Netherlands will compete for the coveted Phoenix prize. Competitors will accumulate points as they battle it out in an equestrian triathlon, foot combat with axes, mounted melee, and sessions of jousting.

The popular Festival of History complements the Tournament, providing a host of activities for all ages and interests. Costumed interpreters inhabit fully outfitted period camps spanning Rome to the Renaissance.

The Squire's Skill at Arms competition is separate from the Knightly tournament. Unarmoured riders compete from horseback with lance, swords, and spears in nine events over three days.

The "Tournament of the Phoenix" was named at the first WorldJoust Tournaments™ event in October 2007. When the Witch Creek fires devastated Southern California, most of San Diego - including the event organizers and an early arriving competitor- were evacuated and it seemed the event would have to be cancelled.

A decision was made to put the event on anyway, and the day of the event hundreds of area residents turned out to enjoy an entertaining day away from the cares and worries that had plagued so many. Surrounded by a sea of smiling faces, English competitor Dominic Sewell declared- 'We thought the fires would defeat us, but instead we have risen,Phoenix like, from the flames'. Thus the"Tournament of the Phoenix" was named.

Since that first tournament in 2007, the event has grown, adding more competitions, displays and exhibitors every year. It has established itself as a valuable opportunity for students and their families to experience history and enjoy a revival of sporting skills and entertainment dating back to medieval times.