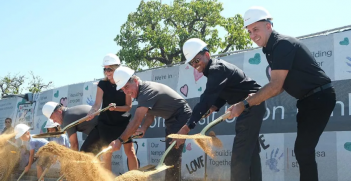 On Wednesday, Union Bank took a major step in that rebirth: a groundbreaking near the long fenced-off site on Spring Street north of the downtown Village.

“We’re going to be real excited when the building is done, and we do the ribbon-cutting and have the grand opening” at the end of this year, said Mary England, president and CEO of the La Mesa Chamber of Commerce. She watched the adjacent banks destroyed 14 months ago.
“You’ll never forget it,” she said. “If you were here and watched it, you don’t get over it.”
Ceremonies that included a pair of young shovel-wielding siblings were held before cameras and company officials downing free drinks and ice cream. (But no city officials took part.)
England called it an emotional day “because it’s been a long time coming, and the community needs this.”
She lauded Union Bank (operating out of a nearby trailer since Jan. 26) for helping local small businesses behind the scenes: “They’ve been very good to La Mesa especially with our situation.”
Carlton Hill, branch manager, called Wednesday’s ceremonies in mid-90s temps and high humidity a “celebration of resiliency for the community as a whole. It’s just a joyous event for us.”
The bank has been in the community since 1926 — but operating at 4771 Spring Street since 1996.
Next-door neighbor Chase Bank and the historic Randall Lamb building across the street on Palm Avenue were also torched during the violent aftermath of a demonstration for social justice last May.
For nearly nine months, customers were diverted to other Union Bank sites on Lake Murray Boulevard in San Carlos, at Federal Boulevard and Euclid Avenue in San Diego, in Casa de Oro outside of Spring Valley and in downtown Lemon Grove.
The rebuilt branch will again feature Union Bank Express Banking kiosks and a business hub where clients can charge their mobile devices while they meet with a small business specialist. Also a hospitality bar where clients can enjoy a cup of coffee or cold beverage. 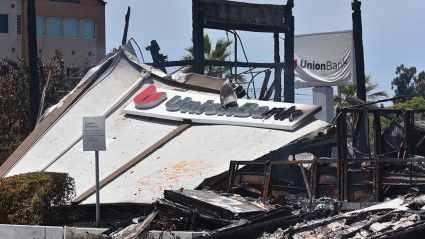 Photo, right:  Union Bank branch lies in ruin after it was set ablaze the night before by arsonists and looters in downtown La Mesa. Photo by Chris Stone
The interior of the new branch will reflect the perseverance and heart of La Mesa.
After the branch burned down, local residents created artwork and wrote messages on banners to inspire hope.
One of the pieces, featuring the message “All you need is love” by Aviana Dobesh, a 5-year-old La Mesa resident, has become a focal point in the temporary branch and will be incorporated into the permanent branch’s design.
The new branch will feature EV car charging stations, drought-tolerant landscaping and low-water-use irrigation system. Many of the materials used for the branch will have recycled content, and Union Bank will work with vendors who share its commitment to sustainability.
Greg Seibly, president of Union Bank since March 2, 2020, thanked La Mesans for their “tremendous outpouring of love and support” and for the “amazing artwork” posted on the fence around the burn site.
Also present was Kevin Cronin, CEO of Union Bank parent MUFG Americas Holdings Corp. and MUFG Union Bank (the M stands for Mitsubishi). He flew in from New York and said: “Truly this site represents what we can do when we come together.”
Said England, the longtime local business cheerleader: “This land has been fenced for so long, and now we are going to see some activity. I think that people will be excited, and they can’t wait.”
Chase Bank also aims to rebuild. As of June 7, City of La Mesa Project 2021-18 at 4791 Spring St. was in the “discretionary review” phase, defined as projects under review but not having yet received planning approval.
“Because Chase does not own the land, the process is expected to take a little longer,” said The San Diego Union-Tribune in March. 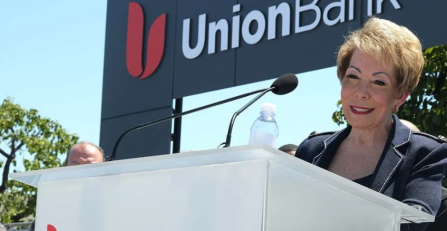 Photo, left:  Mary England, president of the La Mesa Chamber of Commerce, spoke. Photo by Chris Stone
Booked in November, Ricky Bernard Cooper and Alexander Jacob King face charges of arson and looting of the Chase Bank branch.
No one has been arrested in the Union Bank burning.