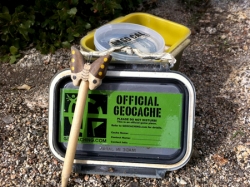 February 13, 2011 (San Diego’s East County) -- One day in June 2010, my hiking partner and I were standing near Water of the Woods, a small reservoir in Laguna Meadow, and she informed me that the oldest geocache in California was only a quarter mile away. How long you have to walk on a trail can be very different than a global positioning satellite (GPS) as-the-crow-flies listing. But in this case the difference was only about twice what the GPS said.

However, after about one minute at "ground zero," Shannon spotted a rattlesnake tucked under an overhanging rock. The desire of getting the find on the oldest geocache in California overcame my well-earned fear of rattlesnakes, and with one eye on the snake, we gingerly continued our search.

Finally, after about 20 minutes, the rattler had enough and gave a short, but startling, warning buzz, and we were out of there. 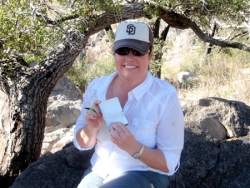 We picked a cold day the following November to plan our return, and to make the oldest cache in California our 300th find. We planned carefully, so when we arrived in the mountains we had 296 caches behind us, had planned a few finds leading up to number 300, and a few backups, just in case of a DNF (did not find), or two. This time, in cold weather, fog, wind and drizzle, we made our way out to the cache site. We climbed the wooded, snowy hill toward the cache, and literally, in about 30 seconds walked right up to the geocache. That's what drew me to geocaching initially, not knowing whether each new search will end in success or frustration - and it can be frustrating.

In 2009 I heard about geocaching from a coworker who had just returned from a weekend in the desert. She and her friends had been hunting geocaches on their quads. For me, a helpless gadget junkie, the thought of a new GPS was too much to resist. I found a remarkable deal on a GPS online, signed up on www.Geocaching.com and got started. I found my first four geocaches on a cold January day, in Coronado. 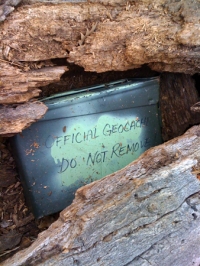 The containers can range from tiny, usually magnetic, "nanos" up to just about anything someone is willing to disguise and use for a geocache. The established standard, for reference, is an old military ammo can. They work well because they are waterproof, durable, and are already green. But there are plenty of snap-lid food containers, waterproof match holders, and camouflaged Altoid tins out there as well.

Some of the variations on the traditional geocache include the puzzle cache, where the finder must solve some kind of word, or number puzzle in order to claim the find; the multi-cache, where the finder is directed to a series of two or more locations to collect information which leads to the final cache. An Earthcache involves identifying a geologic feature in order to record the cache as found. Other varieties have come and gone.

An aspect of geocaching that many enjoy, which is especially popular with kids, is the trading of swag. If a geocache is big enough, the cache owner will start off leaving a few trade items, from small plastic toys to keychains, small flashlights, and even AA batteries, to keep your GPS receiver functioning. Subsequent geocachers will swap something they have, for something they like in the cache container. 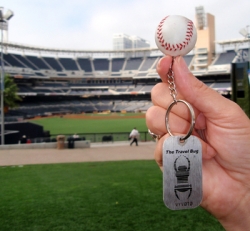 A more high-tech version of swag trading is trackable items. Geocaching.com and other companies sell "travel bugs" and "geocoins." Travel bugs look like military dog tags, and geocoins are coins, from simple metal coins, to elaborate enameled coins. Both styles of trackables have registration and tracking numbers, and the owners can track the movement of their trackables on geocaching.com as people sign them into the geocaches they drop them into.

Geocaching was started in Oregon in 2001, and the Pacific Northwest is still home to the center of the geocaching world, Groundspeak, the folks who run geocaching.com and a few other similarly themed websites, reside in Seattle. In the recent years a few other geocache registration organizations have emerged, but are unlikely to knock geocaching.com from its position as the worldwide heart of geocaching.

One unexpected benefit I appreciate about geocaching is how it has introduced me to so many places in San Diego County of which I was previously unaware. Like many beginning geocachers,I initially hunted geocaches near my home, then spread out to places I liked to hike. 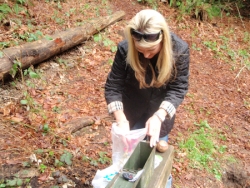 Eventually the desire leads you to new places. Hollenbeck Canyon was one of the first pleasant surprises, found on a geocaching hike. Pine Creek, near Pine Valley is another beautiful reserve I don't think I would ever have explored had I not taken up geocaching. It's not just the grand locations either, sometimes you will be lead to a tiny park, a historical location, or an amazing view by a geocache hider who wanted to share his or her passion with others. Not every geocache is in a lovely, significant location, there is also the possibility of lifting lamp post skirts in a hot, crowded mega mall parking lot.

The initial outlay for a GPS receiver can be $100 and up, but once you've made that plunge, geocaching doesn't cost much more than a day hiking. It's a great activity to share with the kids; they love trading for the treasures left in geocaches. People have been known to geocache on foot, bike, horseback, and ORV. It's easy to incorporate into other activities and can expand your horizons, even if you've lived in San Diego County your whole life.