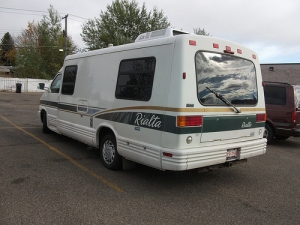 June 13, 2018 (Sacramento) – A U.S. District Court issued a ruling  on June 8th denying the city of San Diego’s motion to dismiss disability discrimination claims made in a lawsuit that challenges the ticketing of homeless people in RVs and other vehicles.

Rising rents and increased homelessness across our region have forced more and more people into living in their vehicles. That in turn has brought complaints in some neighborhoods about recreational vehicles, or RVs parked overnight in residential areas. City lots that allow overnight parking, where some homeless have found temporary places to park their vehicles, do not accept RVs—but RV owners who are homeless and disabled can’t afford the $700 to $1200 or so a month that RV storage costs locally.

The class action law suit, Bloom et al. vs. City of San Diego, filed in November of 2017 alleges that ticketing of homeless individuals, many with disabilities, violates the plaintiffs’ constitutional rights and in addition, discriminates against people with disabilities under the Americans with Disabilities Act (ADA) and the Rehabilitation Act.

The city had been ticketing homeless people in vehicles under two ordinances. One prohibits nighttime parking of RVs on city streets, and the second prohibits using a vehicle as living quarters.

Ann  Menasche, senior attorney for disability Rights California, represents the plaintiff and argued against the motion to dismiss. Menasche states, “Judge Battaglia understands that with San Diego’s affordable housing crisis, homeless people with disabilities are placed in a situation beyond their control.” She adds, “We hope the city will at some point re-think its punitive and counter-productive ticketing policies and work toward real solutions to homelessness.”

The Honorable Judge Anthony J. Battaglia, in his written decision, rejected the city’s argument that the ordinances could not be challenged under disability discrimination laws because they are applicable to everyone regardless of disability status. Instead, the court agreed with Plaintiffs that a program “can violate the ADA and Rehabilitation Act if it disparately impacts or places a disproportionate burden on the disabled.”

The plaintiffs argued that enforcement of the ordinances harmed them disproportionately in three ways, due to their disabilities. First, the city’s homeless shelters were inaccessible to them; second, their preexisting mental and physical health disabilities left them more vulnerable to harms from living on the streets; and third, they were unable to access permanent housing because their disabilities prevented them from working and forced them to rely on government benefits.

Judge Battaglia noted that “disabled and homeless individuals are amongst those hardest hit by “yearly record-breaking rent increases,” and he agreed that these allegations were sufficient to file claims.

Plaintiffs have filed a Motion for Preliminary Injunction to stop the ticketing pending the resolution of the litigation, which is scheduled to be heard before Judge Battaglia on July 26, 2018 at 2:00 pm.

Will continue to exist and increase in the current economy, plus extremely high rents add to the misery. A truly viable, long term solution must be found, not band aid fixes. Start by opening up and create areas in parks and unused parking lots to accommodate the less fortunate folks who just need a safe place to call "home". This should include RV's, tents, and all others. Security staff can be onsite to keep the peace, etc. Temporary 'shelters' are just not enough and do not offer all that is needed for everyone. I'm positive the local churches will assist in what is needed, as well as government agencies. Many people who are homeless, did not make a choice to do it for the adventure. Circumstances most of us simply don't understand, have forced this 'lifestyle' upon them. The ones who want help, will reach out for it and improve their lives. The ones who don't - well there lies a serious problem as well. What to do... ?