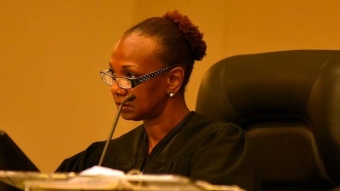 April 25, 2019 (Julian) - Lawyers for San Diego County will ask a judge Thursday to evict volunteer firefighters and others who have locked themselves in the Julian fire station, saying they’re worried about equipment and property worth $3 million being stolen or damaged.

Mecham said former Julian Fire Chief Mike Van Bibber told his Palomar College students April 10 “that if Plaintiffs lose in court they plan on pouring cement down the toilets and drains inside Station No. 56, rendering it uninhabitable.”

Van Bibber on Wednesday called that claim “absolutely ludicrous … almost comical. They’re reaching out in any way to destroy the character of the volunteer firefighters. That’s a defamation of character. I would never do that. No way.”

Judge Randa Trapp will hear a request for a temporary restraining order at 8:30 a.m. in Superior Court Department 70 in the downtown Hall of Justice.

(In a Facebook video posted Saturday Julian fire board member Eva Hatch said district lawyers have advised not to leave the station empty while the courts sort out actions by LAFCO and the county of San Diego. “We are not protesting, sitting in or barricading ourselves in the station,” Hatch said. “JCFPD is simply following legal advice.”)

The county also wants the judge to order Cory Briggs, attorney for the new Julian fire board, to return $374,000 transferred from the Julian-Cuyamaca Fire Protection District bank account into a trust he controls.

“Plaintiffs apparently believe they are their own personal funds to do with as they please. While the Court ordered the funds to remain there for now, there is no telling what Plaintiffs may do with them,” wrote Joshua M. Heinlein, senior deputy county counsel.

Briggs has argued that a Trapp ruling April 5 meant that actions of a former Julian fire board to seek dissolution of the last volunteer fire department in the county were “null and void,” citing alleged Brown Act violations.

But the county says Briggs himself was hired in violation of the Brown Act, the state open-meetings law.

Further, the county says Briggs lied to the court when he “falsely represented … that the writ petition [in the Brown Act case] was unopposed.” Former Julian fire board president Jack Shelver filed an opposition to the petition Oct, 22, 2018, the county said.

“Consequently, the court failed to consider those opposition papers. Such failure was clearly prejudicial as the court entered judgment on the grounds that the petition was unopposed,” said county legal papers filed Wednesday.

Briggs, the environmental attorney running for mayor of San Diego, did not respond to a request for comment.

County lawyer Heinlein concedes that the core of the case is whether the JCFPD still exists.

He said this benefits both parties because no matter who prevails at trial, all parties would be assured the former JCFPD property and funds would remain intact.

On Friday, Judge Trapp is set to hear arguments on whether San Diego County and the San Diego Local Agency Formation Commission or LAFCO, should be allowed to intervene in the Brown Act case.

Briggs, in a 399-page filing April 18 on behalf of the Julian Volunteer Fire Company, said the motion to intervene should be denied “because it would enlarge the issues and interfere with the District’s ability to be represented in the lawsuit.”

“The County has taken the position that the [Julian fire] District no longer exists and purported to fire the District’s new counsel,” Briggs wrote. “If it cannot choose legal counsel it trusts – or cannot have legal counsel at all – how can the District have any involvement in a lawsuit that involves wrongdoing committed by its own board members?”

He said county lawyers argue that they are the only ones who can represent JCFPD’s interests post-dissolution, even though the dissolution is disputed.

“But that would be a glaring conflict of interest,” Briggs said. “The District would be effectively adrift at sea with no rudder and no pilot – or worse, controlled by a crew chosen by LAFCO and the County that wants to see the District crash upon the rocks.”

Van Bibber also rejected Mecham’s contentions that people occupying the Julian fire station on state Route 79 made false 911 calls “in order to get deputies to leave the county station and proceed to Station No. 56.”

“Never happened,” Van Bibber said of the false-calls claim. “There’s no way anyone of us would have done that. Are you kidding me?”

The county also submitted a statement by Elaine Kavasch, a research analyst at Davis-based DigiStream Investigations.

She said she was hired by county counsel to examine and archive social media posts regarding the Julian fire department.

“Through these searches, and monitoring, I identified 11 individuals who had visited or occupied the station since the date of incident, or who may have had knowledge of individuals involved, or activities occurring at the station,” she wrote.

“It should be noted that all content featured in the report is available to the public, and all privacy settings on all accounts were respected,” Kavasch wrote.

Van Bibber, who says he still retains his Julian fire chief title until a court rules the district dissolved, called the social media review by “Facebook police” a waste of taxpayer dollars.

“Seriously? If you’ve got that kind of money, you should put it to public safety,” he said.

Lori Foss, a Julian activist who credits JCFPD volunteer firefighters with saving her life and home in the 2007 Witch Fire, said she’s making buttons that say: “I’m on the list.”

“Another set of buttons [are] saying: How do I get on the list?” Foss said in a phone interview.

“We have a sense of humor. This is ridiculous.”

Judge Trapp refused to grant the County a TRO, or to order JCFPD out of their own station. Instead she said the County could "check on" the station, with advanced notice, to assure themselves no damage was being done by the JCFPD firefighters to their own station. Judge Trapp also order the County to pay the paramedics' wages, and salary for the District Administrator and District Chief. There will be more hearings before all is decided...maybe all the way to the CA Supreme Court. The County discontinued a $60K subsidy to JCFPD but has no compulsion against spending a million dollars in attorney fees to fight JCFPD in Court. Follow the money. The County needs to include JCFPD into Area 135 before they can impose a fire service fee on all of the unincorporated area of SD County. San Diego spends about $30M for fire services, compared to Riverside that spends over $300M. San Diego needs money, badly, and soon.