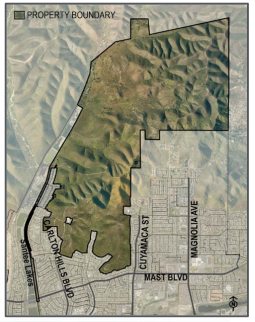 By Miriam Raftery and Mike Allen

The ruling found that the city’s environmental review of the project was inadequate, violating California Environmental Quality Act (CEQA) by failing to adequately disclose how the development would affect wildfire evacuations and safety in the surrounding community.

The Judge also slammed the city for its last-minute removal of the Magnolia Avenue extension from the project just six days before approving the project’s EIR, even though that extension had been touted as a key wildfire evacuation route. This was inadequate for public review or evaluation of impacts on neighbors along other connector roads should an evacuation be needed. In addition, the judge found, “the City’s decision not to recirculate the EIR violated CEQA.”

Despite the setback, Jeff O’Connor, HomeFed’s director of operations, said the project will eventually go forward.

“We expect to work on a more detailed fire evacuation plan, and have it completed, and we’re hoping the judge will agree with the new plan,” he said. A revised plan should take three to six months, he told ECM.

O’Connor noted the judge agreed with the preponderance of the mitigation measures in the environmental report, including the plans for the gnatcatcher and other endangered species that were challenged by the plaintiff groups.

In October 2020 the Center for Biological Diversity, Preserve Wild Santee, Endangered Habitats League and California Chaparral Institute sued the city of Santee for violating the California Environmental Quality Act when it approved the development in September.

Bacal was particularly critical of the project’s evacuation route involving Mast Boulevard, and its supposed connection with SR 67. “It is not possible because Mast Boulevard does not connect to Highway 67 and instead dead-ends in a park,” she wrote, noting that there are “no plans to connect Mast Boulevard” from its termination point.

She also criticized the city’s legal counsel for arguing that residents might shelter in place during a major wildfire, and that the plan fails to inform residents “as to the risk of injury or death if residents are instructed to remain on site while the fires burn around them.”

“The court understood that in this never-ending fire season, developers can’t hide a project’s wildfire and community safety risks from the public,” said Peter Broderick, an attorney at the Center for Biological Diversity, in a press release. “This is absolutely the right decision to protect the people and wildlife who call Santee home. This project should never have been approved, and officials across California need to stop letting sprawl drive up fire threats.”

“In acknowledging the need to protect people from the increasing risk of wildfire, the court has accomplished something California’s political leaders have consistently failed to do — say no to those who would profit by putting families in harm’s way,” said Richard Halsey of the California Chaparral Institute.

“Growing wildfire risks must not be ignored,” said Van Collinsworth of Preserve Wild Santee. “The court’s decision rightly requires the rising risks to be recognized.”

Santee Mayor John Minto said HomeFed will have to amend the EIR and provide a better fire evacuation plan, but even when that’s done, he anticipates yet another round of legal challenges, which only will increase the cost of housing for buyers. But ultimately, the project will be completed, he predicted.

“I don’t look at this ruling as something that will stop it. It’s going to happen someday. I don’t know when but I’m just going to take it one day at a time,” Minto said.

The ruling follows a series of recent court decisions blocking sprawl development challenged by the Center for Biodiversity and others in high fire-risk areas.

O’Connor said the litigation against new developments has pushed the average price for single family homes in San Diego County to the most expensive in the nation, and it makes no sense because of the lack of housing. “We have a huge crisis going on in this state and a huge shortage of housing, and when we get this project up and running, this is going to help that,” he said.

Fanita Ranch was approved in September 2020 by a 4-1 vote following a marathon, six hour discussion that was transmitted via the city’s website because of restrictions imposed from the Covid 19 pandemic. Former Councilman Stephen Houlahan, who is now running for Congress in the 50th District, cast the lone no vote and he cited fire concerns specifically. Two council members approved the project despite making campaign promises not to vote on the project until the people could weigh in on a ballot initiative.

Last year, the Council voted 4-0 with Minto absent to put the Fanita Ranch to a public vote in November 2022.

is a front by Arizonia to stop growth in California...Collinsworth would not even have a home in santee if the kind of crap he is pulling was done in the neighborhood he lives in!! people want to live in santee!!! Collinsworth is stopping people from living in santee because Collinsworth got his and no one else can.