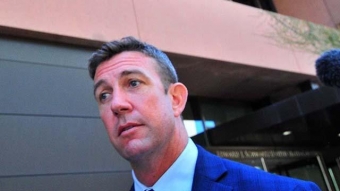 By Miriam Raftery
Photo by Chris Stone, Times of San Diego, a member of the San Diego Online News Association
July 8, 2019 (San Diego) – U.S. District Judge Thomas Whelan has rejected a trio of requests sought by Congressman Duncan Hunter’s legal team, City News Service reports.
Hunter’s lawyers argued that all 60 federal corruption charges should be dismissed or that two prosecutor should be removed because they once attended a presidential campaign event for Hillary Clinton in 2015. The U.S. Attorney’s office said the prosecutors attended the event in their official capacity to help law enforcement. Whelen ruled that prosecutors had sufficient probable cause to prosecute Hunter regardless of the reasons why prosecutors attended the function.
The judge also rejected the Hunter defense team’s request to move the trial out of San Diego County because they claimed media coverage would make it impossible to seat a fair and impartial jury. They sought to move the trial to California’s Eastern District, which has a heavy Republican registration and where voters predominantly supported Donald Trump for president. Hunter has been a vocal advocate of Trump.
But Whelan noted that Hunter won reelection in 2018 despite negative publicity over his indictment.  The judge did, however, note that if the court finds jury bias once a jury pool is selection, a change of venue motion could be reconsidered.
Hunter’s trial is slated to begin in September.  He is charged with spending a quarter of a million dollars in campaign funds on personal expenditures including family vacations, jewelry, oral surgery, airfare for his son’s pet rabbit, a ski resort trip and travel to stay overnight with five different women other than his wife, including female lobbyists and Congressional staffers.
Hunter pleaded not guilty and has repaid his campaign for only about $60,000 of the disputed amount.
His wife, Margaret, has pleaded guilty to one count of conspiracy and is reportedly cooperating with prosecutors.

Are the Facts & truth from media sources getting under your skin? You have expressed personal views regarding politics quite a lot yourself, so maybe you should listen to your own advice and, "take a break". But I know that isn't going to happen because you like to spew your contentious hate and thinly veiled racism in your comments. So yeah, I will continue posting my thoughts here as much as I want, being civil towards others posting in the comment section though. Something I suggest you try instead of attacking nearly everyone and subjects you don't like because of differing viewpoints. Better yet, quit getting yourself agitated and read something more to your liking.

Take a break Grandpa, everyone by now knows your views and politics, on the dozens of articles regarding our Congressmans dilemma.
Duncan Hunter has got to be Very worried about potential blow back ever since his wife turned on him. It would appear that he's in trouble and could soon face jail time. The facts which have been already been admitted to by both of them would cause a Normal person to exhibit some amount of shame, but this seems not to be the case with Duncan.