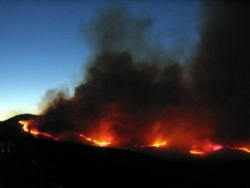 This is one of the most complex tort cases in recent San Diego history.  It stemmed from the Witch Creek fire, which burned 197,990 acres and  destroyed 1,124 homes. Although the California Public Utilities Commission has found that SDG&E lines caused these fires, many wildfire victims have yet to receive a penny in compensation five years after their homes and lives were destroyed. Some remain in trailers or other temporary housing five years after the fires.

Of concern was the pace of the mediation process. Asking to move forward to trial, Jackson told the Judge that his clients "have been pushing for four and a half years." He also said that Valley Oaks, a business that was affected by the firestorm, "is going under." They can't wait much longer, he added.

Judge Strauss, however, seemed satisfied with the pace, noting that 1800 cases have been resolved though the mediation process which he views as a better use of judicial resources.

Jackson raised concerns for as many as 17 victims of the Rice Canyon fire who he indicated may want to go to trial.  He made a motion to move to trial, which was denied at this time. But the Judge,and Echiate agreed to meet back on March 21, to talk about first a Witch Creek and Guejito trials, before dealing with the Rice Fire.

One of the concerns in the case were clients that Tosdal and others have lost track off over the last five years and whether these cases should be dismissed for lack of interest.  In the end, there was an agreement with the Judge to meet on February 14 to deal with this issue.

The Judge told those present at the end, "You have done a great job in getting these things resolved. It's been very successful."