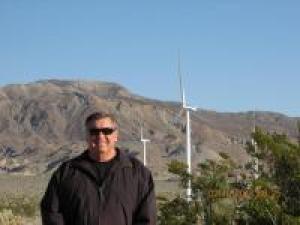 Update March 16, 2013: A second restraining order has been granted to Jim Pelley, the other ECM photographer threatened by Pattern Energy's manager, Russell Graham.

Ewing’s photos and videos of the project have appeared in East County Magazine as well as on his own Facebook Page and a website documenting the project’s impacts on the desert and the community.

Graham admitted to following Ewing and reaching into his truck to try and halt him from taking photographs.  Ewing’s camera recorded Graham stating he was going to “kick a f*cking hole in your throat.”

Ironically, Graham described his job duties as including “safety of the public” among others.

The Judge refused to allow two Sheriff’s reports confirming threats made to Ewing as well as a second photographer, Jim Pelley. According to the judge, admitting the reports would be allowing hearsay.  Had he admitted the documents, the records would have illustrated that Graham first tried to deny making a threat, than admitted he had done so after the Sheriff advised him what was on the tape.

Pelley’s report would have documented that a Sheriff's officer reported he spoke with an independent witness, Kenny Earl, who confirmed that Graham earlier asked the witness to call Pelley and advise that Graham intended to come to his home and break both his elbows if he did not remove a video taken two days earlier during a tour at the wind project.

The video Graham found objectionable included a question by a tour participant who asked how much power a turbine would produce on a windy day.  Pelley and Ewing also pressed Graham to answer the question. In response, Graham said a turbine could power 100 homes on a windy day.  If true, that would mean the project would produce just one-tenth the amount of power that Pattern told the federal government it would provide. (For details and our prior coverage of Graham's arrest and the videos,  click here.)

Graham told the judge he “did the math wrong.”

He denied asking to have the video taken down, a statement that contradicts contents of a police report.  In court, he claimed he merely wanted his name removed from the video because he objected to it being on a photographer’s Facebook page next to  a reference to destruction of the desert. He said he was trying to make a living for his family. “That’s my livelihood and when people pull up my name to see what projects I’’ve done, that’s what they will see,” he said.

The project, on 12,400 acres of public Bureau of Land Management property, has bulldozed vast tracts of desert to erect 112 turbines and build 42 miles of roads.  Ewing maintained that he had a right to post the video.

Both Ewing and Graham told the judge that their relationship at the work site had been respectful prior to the altercation.  Graham admits to following Ewin onto the Evan Hughes Parkway, where Ewing had parked and was taking photographs on February 5. But their stories differed sharply over what transpired after that.

According to Ewing, Graham got out and reached into the window of Ewing’s Jeep, then tried to pry his fingers off the camera and take it.  Graham admits touching Ewing but denies trying to take the camera; he  says he pushed the camera down because “I didn’t want a camera in my face.”  Then he made the threat.

“I felt very threatened,” Ewing testified, adding that Graham was “out of control…I felt very susceptible; he could’ve hit me in the face; he could’ve had a weapon.” Ewing accelerated and drove to Miller’s Garage, where he called 911. He indicated that his wife is “very scared” and that a future threat remains since Pattern continues o employ Graham at the project.

Graham told the Judge he didn’t mean to actually harm Ewing when he made the threat.  He explained his wording choice this way: “It’s like saying I’m going to kick your ass over your shoulder so you can talk out of your ass,” he testified.

Bill Pate, attorney for Ewing, pointed out that Graham had told police he did mean the threat “figuratively.”

Pate repeatedly attempted to impeach Graham’s credibility. He asked  Graham if he told Kenny Earl to inform Pelley that if the tour video was not taken down by 5 p.m. on February 5, “you would go to Pelley’s house ad harm him and break both of his elbows.”

Pate then  pointed out that a Sheriff's report indicated an officer had spoken with Earl, who confirmed the threat.

Pate also hammered Graham for declaring under penalty of perjury in Item 6 of his declaration that “Parke Ewing has interfered with my work and others” and claiming that Ewing “has engaged in verbal abuse, name-calling and shouting at me in my workplace.”  The attorney noted that this statement conflicted with what Graham said in court, noting that the incident occurred on a state highway, not on the project site, which is on federal land –and that Graham had admitted that prior to the altercation, Ewing’s relationship with him had been cordial and professional, never abusive.

As for the violent threat made against Ewiing caught on tape, Pate stated to Graham, “You just admitted to making that statement.  But you denied it to the police You did not admit it until you knew there was a recording.”

He did, however, allow admission of the most damning piece of evidence: the video documenting what the Judge described later as a “threat of physical violence…a graphic and explicit threat” that satisfied him there was enough cause to restrain.

Graham’s attorney, Jon Willis, argued that the incident was a “one off” and that there was no reason to believe it would recur.  He claimed the law requires a “standard of high probability” of a recurrence, and that this was standard was not met.

Pate’s summation noted that to grant injunctive relief, one of three findings must be made: a violent action, a threat of physical violence, or an ongoing pattern of socially unacceptable behavior.  He argued that assault and battery had occurred, as well as  a threat that “couldn’t be more clear and convincing. We have it on tape.”

He observed that Graham and Ewing’s paths cross frequently at the site and that there is a high probability of future harm.

The Judge ruled that he was “satisfied there is enough to restrain” but added that he would make the order “as limited as I can make it” and would not prevent Graham from working at his job.

Since the project construction is expected to end in June 2013, the Judge issued the order through December 31, 2013.  Graham is prohibited, among other things, from harassing, attacking, threatening or hitting Ewing, as well as from destroying personal property or destroying the peace. “You may not contact him in any way,” said the Judge, spelling out specifics.

He also prohibited Graham from attempting to learn the whereabouts of Ewing.  Graham is also prohibited from owning or buying firearms.  “If you have any firearms, you must turn them into law enforcement or sell them to a licensed dealer,” the Judge added.

Graham’s attorney told the Judge that Graham “owns substantial firearms in Texas” at his ranch there and asked if the order applies to those.

“I will not opine on whether firearms in Texas violates this order,” the Judge replied.

He informed Graham that if he abides by the terms of the injunctive relief, it will expire at the end of the calendar year.   He advised Ewing that if additional disturbances occur, he is entitled to apply for an extension.

The Judge's decision raises questions over the District Attorney's curious decision not to file charges. A Sheriff's representative told ECM that the Sheriff recommended that three felony charges be filed against Graham.  Ewing said that Marco Nunez in the D.A.'s office called him, however, to state that charges were not being filed in Ewing's case because Graham indicated he was "sorry."  Nunez did not return repeated phonecalls from ECM requesting comment on the dropped charges, however a faculty member at Thomas Jefferson School of law advised ECM that it is highly unusual for criminal charges to be dropped in light of such compelling evidence of a credible threat, unless there is agreement from the victim that charges should be dropped. It is unclear whether charges may be filed against Graham over the alleged threats against Pelley.

After today's ruling, Ewing told ECM, "I am very happy that Judge Richard Bohlander, of the Imperial Valley Superior Court, ruled to extend the Temporary Restraining Order that was ordered against Pattern Energy's project manager, Russell Graham." He added, "I have renewed faith in our judicial system."

Graham’s troubles are not over. Next week, Pelley heads to court to seek injunctive relief for threats of violence allegedly made against him by Graham.