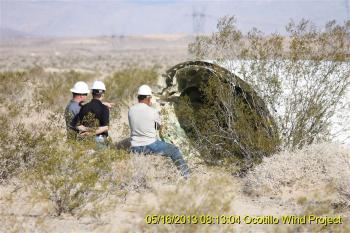 May 20, 2013 (Ocotillo) – Federal Judge Gonzalo Curiel has granted a motion filed by citizens’ groups to remand a lawsuit over the Ocotillo Express Wind Facility from federal court back to state court.

The suit had sought to halt construction and overturn Imperial Valley Supervisors’ approval of the conditional use permit and variance. The suit argues that the County failed to comply with the California Environmental Quality Act (CEQA) when it approved massive wind turbines near homes on federal Bureau of Land Management properly formerly protected for biological and cultural resources.

Due to the backlog on the court calendar, the case has languished and the project is now built. Among other things, the suit contended that the project would irreparably harm recreational, cultural and biological resources, also threatening the health and welfare of local inhabitats.

The latter point was forcefully driven home last week, when a wind turbine blade weighing several tons snapped off and crashed onto a trail below.

Pattern Energy, the developer, had initially succeeded in moving the case to federal court, claiming that County supervisors were merely acting on orders from the federal government.  But Judge Curiel rejected that argument and further, noted that nothing precludes a County from undertaking its own environmental review under state law.

If a state judge rules that the project should not have been built, the court would be the second official entity to make such a finding. The California Native American Heritage Commission recently ruled that the U.S. Bureau of Land Management failed in its duty to protect Native American cultural resources at the site known for centuries to local tribes as the 'Valley of the Dead."  The NAHC declared the site a sanctified sacred site and that the BLM should not have approved the wind project on the site.

The NAHC has asked the California Attorney General to look into options for pursuing legal action.  Several members made clear that they believe the only appropriate mitigation would be to tear the turbines down.

Further adding to Pattern Energy's woes while the project remains offline pending investigation into whether additional blades are at risk of falling off, the first quarter energy figures released by the Federal Energy Regulatory Commission reveal that the project is producing only 19% of capacity -- or about half what Pattern projected when it sought and received taxpayer subsidies to build the controversial project.

Let's hope a pray for judges that heed the law.