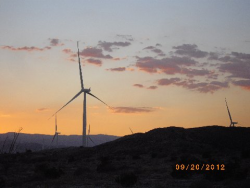 CARES had filed suit against Pattern Energy, the U.S. Department of the Interior, Bureau of Land Management and federal officials.  The group, formed by local residents in Ocotillo and represented by attorney Bill Pate who owns a home in Ocotillo, had alleged that the project was approved without proper engineering reports and that the site lacks adequate wind resources, among other allegations, as ECM has previously reported:  http://eastcountymagazine.org/node/10987  and http://eastcountymagazine.org/node/10107 .

Interesting. Thanks, Miriam. By "right," you don't mean the actual legal "right" to sue, right? Because (as I understand it) strictly speaking, anyone can sue anyone else for anything. That is a right. Mightn't it be closer to the judge is saying they have inadequate justification for their case? Don't get me wrong. I know next to nothing about these matters, and I'm certainly not trying to put words into your pen, just trying to understand.

In any case, and more importantly, I agree with your conclusion. Who could have a greater--more legitimate  stake in this than the resident desert lovers?

But if you don't have standing the judge throws it out.

He specifically did not rule on the merits of the case. The claims made about lack of engineering reports and inadequate wind speeds may all be true, but if you don't have standing a judge won't hear the case.  Someone with standing could theoretically refile and have the identical case resolved in their favor.

I, too, am having trouble understanding the lack of standing rationale in this case, however.

Lacks "standing?" Anyone know what that means?

means the right to sue, basically. For instance an outside group with no stake in the area could be found to lack standing. You or I couldn't sue to stop a wind farm in Alaska, for instance, unless we own property or are somehow affected.

The judge seemed to think that because this citizens' group wasn't officially formed until the project was approved they somehow lack standing, though I find that bizarre since everyone in the group including the lawyer lives in Ocotillo.

It will be interesting to see if the attorney refiles on behalf of any individuals, instead of the CARES organization.

The judge did not address the merits or arguments of the case itself, and I will say many of the arguments looked compelling to me.