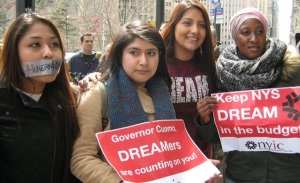 April 25, 2018 (Washington D.C.) – A federal judge in Washington D.C. has ruled that the Trump administration’s decision to end the Deferred Action for Childhood Arrivals Program, or DACA, is “unlawful.”

U.S. District Judge John Bates ordered the administration to begin renewing work permits for DACA recipients, but he also stayed his ruling for 90 days to allow the Department of Homeland Security to provide justification for ending the program, which protects law-abiding young immigrants from being deported.

President Donald Trump earlier rescinded DACA, an Obama-era program, and announced he would end the program starting in March. The President’s announcement has struck fear into the hearts of some 690,000 DACA recipients,” who came here as infants, children or teens.

DACA provided two-year renewable work permits and protection from deportation for approximately 690,000 young immigrants, or “dreamers” who are only eligible for the program if they have no criminal record and are either students or employed.

Judge Bates found the decision to end DACA was “arbitrary and capricious because the Department failed adequately to explain its conclusion that the program was unlawful.”

Bates is the third judge to block deportations of dreamers, following decisions by federal courts in California and Washington.  But his ruling is far broader:  if the government can’t come up with a legally justifiable explanation for ending DACA, the judge says he will rescind the program’s termination and also require Homeland Security to enroll new applicants – a decision that could extend DACA protections to thousands of eligible young immigrants.

The ruling came in a case filed by the NAACP, Microsoft, Princeton University and a student.

Microsoft has indicated that deporting young immigrants would be harmful to businesses in the high-tech industry.  Microsoft President Brad Smith said the company hopes the judge’s decision will provide incentives for Congress to create a “legislative solution the country and these individuals so clearly deserve,” adding, “As the business community has come to appreciate, a lasting solution for the country’s dreamers is both an economic imperative and a humanitarian necessity,” the Washington Post reports.

But Trump Justice Department spokesman Devin O’Malley issued a statement affirming its view that DACA was implemented unilaterally after Congress declined to extend benefits to young immigrants, adding, “The Justice Department will continue to vigorously defend this position.”

Congress has thus far failed to pass legislation to protect DACA recipients, which Trump has said he would only consider signing if Congress also approved money to build a border wall. When his demand was not met by Congress, drawing opposition from virtually all Democrats and some Republicans, Trump declared DACA “dead.” But his administration has renewed over 55,000 DACA work permits, under an earlier court order.