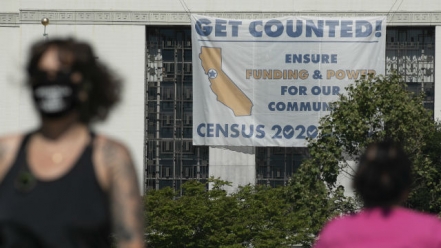 Photo:  a sign encouraging residents to participate in the 2020 census hangs from the Alameda County Courthouse in Oakland. Photo by Anne Wernikoff for CalMatters

September 6, 2020 (San Diego) - Los Angeles and a coalition of other local governments and civil rights organizations have secured a temporary restraining order in a lawsuit against the Trump Administration over its decision to cut the timeline for the 2020 U.S. Census.

The order requires a cessation of the administration’s implementation of its August plan to prematurely cut off census outreach.

“The court’s ruling today was absolutely essential. It puts a firm stop to the Trump Administration’s efforts to prematurely curtail Census outreach — efforts that would lead to an undercount with devastating consequences,” said Los Angeles City Attorney Mike Feuer.

“A full Census count, void of political interference, is vital if Angelenos are to receive our fair share of federal resources and political representation,” he said.

Feuer and the national coalition sued the administration last month over its decision to compress eight and a half months of data collection and processing into just four and a half months, which would likely lead to a disturbing undercount of populaces.

The national coalition is composed of the cities of Los Angeles, Salinas and San Jose, along with King County, Washington and Harris County, Texas, and civil rights groups — Black Alliance for Just Immigration, the National Urban League and League of Women Voters — along with Harris County Court Commissioners Rodney Ellis and Adrian Garcia.

The Census will determine each state’s representation in Congress as well as formulas for the distribution of federal aid. Critics have accused the Trump administration of attempting to undercount people in Democratic cities and states.