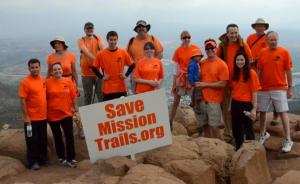 She told ECM that the Judge contended he had hoped to see case law to show that he had jurisdiction.

“I told him that my jurisdiction is the California Constitution,” said Severson, who added that article 7, section 3B1 requires that meetings be open and further, section 3B2 states that courts shall construct the statute in furtherance of the people’s rights of access.

The Court, by contrast, citing a Public Utility Code  in denying the access.  However, Severson said, the court strongly urged the 4th District Court of Appeal to decide this case, even if it does so after the meeting has occurred.

That’s small consolation to numerous members of the public  and media who have been barred from attending the stakeholders meeting, which comes just one day before the CPUC is set to rule on whether or not to approve three gas-fired power plants in San Diego County, including the controversial Quail Brush power plant near Mission Trails Regional Park.

On  Thursday March 21st, at a meeting that IS open to the public, the CPUC will be voting on whether to approve any of the three power plants.  The public meeting will be held at  5520 Overland Avenue, S.D., 92123  in the Conference Center Hearing Room at 9 a.m. with sign-in at 8:30.

Opponents plan to hold a rally outside at 8 a.m.  according to a notice posted at http://savemissiontrails.org/.

In additiion, Disenhouse will hold a press conference outside the closed-door meeting on the 20th and has invited the public to join her from 11:30 to 12:30 on the 20th at  Scripps Seaside Forum at the Scripps Institution of Oceanography (UCSD) - 8610 Kennel Way, La Jolla, CA 92037 (parking at Kellogg Park/La Jolla Shores, several blocks south on El Paseo Grande).

"We are planning an inspiring visual media event (think solar panels on the beach) at the stakeholder meeting to push for transitioning to clean energy. This is ahead of the CPUC’s Thursday meeting in San Diego (come to that too!) where the commissioners will decide on three dirty gas-fired power plants proposed for San Diego County… none of which are actually needed," Disenhouse wrote in an e-mail to her supporters, describing the media event as a call to the CPUC to "move beyond fossil fuels and to support clean local solar."  She added, "TThis is a great opportunity for us to say: “We don’t need NEW fossil fuel plants. The best way to secure reliable energy & mitigate climate change is through efficiency and renewables.”

In a related action, activists have launched a petition calling for the removal of CPUC Chairman Michael Peevey: https://www.change.org/petitions/governor-jerry-brown-appoint-a-new-president-of-cpuc-immediately-2?  Peevy has been accused of inappropriately and secretly pressuring the California Energy Commission Chairman to support the Pio Pico power plant, as well as holding  behind-closed door dealings with energy companies.