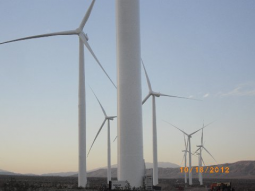 "It is discouraging that our democratic system of checks and balances has broken down in relation to the administration's determination to usurp our public lands for industrial energy development,” said . Terry Weiner, Imperial County Projects and Conservation Coordinator at the Desert Protective Council. “  If we can no longer count on the courts to force our federal agencies to adhere to their own laws, how  are the American citizens supposed to protect our national natural and cultural heritage for future generations?"

The DPC has not yet announced whether it will appeal the decision. View the judge's ruling in the DPC case here.

The Quechan tribe of Fort Yuma, Arizona, traces its ancestry to the project site, where sacred ceremonies have continued to be held in modern times.

“There is no victory in destroying the ecology.  Ecology is based on balance and upsetting that balance has consequences,” said  Preston J. Arrow-weed with the Quechan tribe.

His wife, Helena Arrow-weed, added, “This was a case based on deception, greed, and misinformation about jobs, money, and energy. The case is part of a negligent, irresponsible and ambitious national plan to change from fossil fuels to “renewable” resources.  It is a plan that, because of poor planning, will destroy much of what environmentalists and Native Americans have been struggling to protect and preserve for decades.” She concluded, “It is a price too high to pay for “renewable” resources in my opinion. I believe there are better answers for this problem.”

“These rulings confirmed that we and the BLM followed the rules, working with Native American tribes, community groups and local residents during the development process," Garland stated.