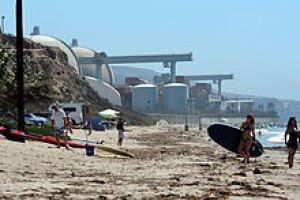 April 17, 2015 (San Onofre) - A federal judge has ruled that a lawsuit filed by Citizens Oversight on behalf of ratepayers challenging the San Onofre settlement agreement should be heard in state court, not federal.

U.S. District Court Judge Cathy Ann Bencivigengo issued the tentative ruling “with prejudice” meaning plaintiffs will not be able to amend and refile in federal court if the ruling stands. Oral arguments are being heard this week—but only on the fair hearing issue. Merits of the case won’t be allowed.

Citizens Oversight, an El-Cajon based watchdog group, argues that saddling ratepayers with shutdown costs for the flawed nuclear facility amounts to an unconstitutional taking of billions of dollars.

The Public Utilities Commission approved a settlement that charges ratepayers 70% of the $4.7 billion costs to shut down the reactors after radiation leaks were found.

Recent state and federal probes have been launched into former CPUC president Michael Peevey and others after revelations of secret communications with utility companies.  Peevey had backdoor dealings with Southern California Edison over the San Onofre settlement, creating the appearance of favoritism for the utility.

Among other questionable conduct, Peevey held a secret meeting in Warsaw Poland, with an Edison executive –and notes obtained by Citizens Oversight from that meeting are similar to terms later approved by the CPUC.