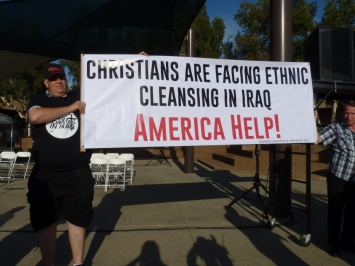 Many of those detained have led law-abiding lives in the U.S. for many years, but had been on a list for deportation due to mostly minor violations ranging from false paperwork to petty crimes.

The Trump administration now seeks to deport them to Iraq after securing an agreement from the Iraqi government to accept deportees.  But Iraq remains war-torn with the Islamic State or ISIS continuing its reign of terror against Christians and other religious minorities.  Former Secretary of State John Kerry had termed the slaughter of religious minorities in Iraq a "genocide."

The American Civil Liberties Union (ACLU) filed the suit seeking a suspension of deportation orders to allow Iraqi immigrants here to go to immigration court and argue that their lives would be in danger if they are sent back to their native country.   International law prevents returning immigrants to their homelands under such circumstances.

The ACLU suit was supported by the Minority Humanitarian Foundation in San Diego, which posted on its Facebook page after the ruling, “Thank the Lord!” adding, “The sign of relief may be brief, but significant. The fight continues and thank you to everyone that has stepped up through the process.”

El Cajon resident James Elia wrote, “I'm relieved to see the leader of the Minority Humanitarian Foundation, my brother Mark Arabo, is going to do everything he can to fight the deportation of people to Iraq. I'm glad to be a member at large with the foundation and I WILL fight side by side with mark to ensure no human is sent to death in this genocide Iraq has been fighting.”