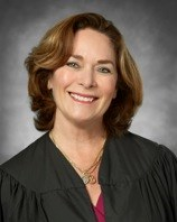 Judge Schall has issued a statement defending her record.  In addition, Clear Channel has removed the billboards, stirring up new controversies over its actions as well as free speech issues in judicial elections.

The billboards stated that Keehn was the only candidate not convicted of a crime, adding, “No one is above the law, not even a judge.”

Clear Channel issued the following statement, 10 News reported.  "Unfortunately our protocol for political ads was not followed and we took the ad down. We have offered the client a variety of resolutions, including the fullest refund allowable under the laws governing political contributions."

Keehn campaign spokesman Jeff Powers had this to say.  “The supposed grounds for taking them down was that it was an "attack ad" and Clear Channel has a right to remove if they decide..“We haven't decided if we are going to file a complaint yet.” He noted that Clear Channel just had four cases in Superior Court.

Powers added, “It’s amazing what lengths the judicial powers in this town will go to in protecting their own. We believe this is a First Amendment issue.  The law and First Amendment do not allow the government to discriminate based on the content of an ad.  And we also believe Clear Channel is impacting Carla’s First Amendment rights by choosing to not air one side of an important issue.”

Clear Channel has previously been embroiled in billboard controversies.  After being petitioned by progressive activist groups, the company removed 145 billboards stating that voter fraud is a felony, messaging that opponents contended were meant to intimidate voters.  Those billboards were placed anonymously. Clear Channel also removed billboards for a pro-Palestinian organization seeking defunding of the Israeli military.

Keehn has questioned why Schall received a well qualified rating from the County Bar Association, while Keehn was rated qualified, given Schall’s past conviction and judicial admonishments. In addition, Keehn obtained her law degree from the University of California, Hastings, while Schall's was from a law school not accredited at the time.

We issued an invitation to Judge Schall as well. Judge Schall responded that she was not available due to scheduling issues, but has now provided an extensive written response clarifying that her conviction was expunged and offering an explanation of the admonishments, as well as details on her 35 years of judicial experience and accomplishments.

Judge Schall has served as a judge since 1985 and previously as a deputy district attorney, prosecuting over 300 cases.  She has sat in every department of the San Diego Superior Court and has served as Supervising Judge in divisions handling criminal, civil, probate, mental health, and California Environmental Quality Act matters. She currently covers civil, criminal and family matters. She has been endorsed by all 125 Superior Court judges and over 15 retired judges as well as by  City Attorney Jan Goldsmith, the San Diego Lawyers Club, Lincoln Club of San Diego, La Raza Lawyers, San Diego Family Bar Association and Crime Victims and Citizens for Law and Order.

Regarding the reckless driving incident, Schall had this to say. “In Sept of 2007 while going through a divorce after 28 years of marriage and caring for 2 elderly parents, I was arrested and pled to a reckless driving with DUI conditions. A divorce makes us vulnerable, still no excuse. I apologized to every member of my bench, family members and business associates. I volunteered to speak at civic groups, volunteered to work in Family Court for 3 years and after I completed 3 years of probation I was granted an expungement (dismissal in June 2011) of my conviction.”

She added, “Although the legal community knew of this arrest, I ran unopposed in Feb of 2008. The CJP (Committee on Judicial Performance) chose to publicly admonish me and disclosed the private admonishment of 1992. Every person and association that has endorsed me, is aware of my history. I have been rated well-qualified by those same peers (SDCBA) and endorsed by the UT. I believe it is my years of service, work ethic and willingness to work any assignment that has earned me their forgiveness and understanding.”

As for the other two admonishments on her record, Judge Schall replied:

“In 1992 I was assigned to the Juvenile Court. I was presiding over a dependency case. The matter was set to be scheduled to determine if the parental rights would be terminated and if the children would be eligible for adoption.  I was notified by the attorneys for the foster parents and social services that the mother's appellate attorney had been sharing with 3rd parties outside of the courtroom, confidential testimony given during court proceedings. This could be a violation of the Welfare and Institutions code. In an effort to determine what had in fact occurred I scheduled a hearing and directed all counsel, parties and the appellate counsel to appear. At the hearing I was unable to determine what had or had not occurred, reported my concerns to my Juvenile Presiding Judge and recused myself from the case. The CJP gave me a private admonishment advising me that that I exceeded my authority in ordering the appellate attorney to appear and had become embroiled in the process. I had hoped to resolve the matter informally. Instead I learned a formal  proceeding would have been the better approach.

She added, "In 1995 I was supervising the Civil Restraining Order department in Vista. My bailiff advised me that 2 women were" getting into it" in the hallway. Altercations in the hallway were quite often during this calendar. So I asked him to bring them into the department to hopefully calm them. The case involved the petitioner "new wife" seeking a restraining order against the respondent "former wife". The petitioner's petition and her testimony was that the respondent had entered her and her new spouse's home uninvited and threatened her. Apparently the ongoing dissolution proceedings were quite heated. During her testimony the respondent interrupted, was acting angry and aggressive towards the petitioner. She was cautioned. She did not stop and I believed the petitioner was at risk, so I remanded her for contempt. During her detention in the back hallway she began to act extremely unstable so she was transported to CMH (County Mental Health). I was publicly admonished by the CJP for not having followed  formal contempt proceedings. They found that the conduct did not rise to the level of a direct contempt, which can allow for an immediate remand.”

Regarding the San Diego County Bar’s ratings system, Judge Schall stated, “ I am aware that the rating protocol followed by the SDCBA is thorough, arduous and time consuming.”

As for her opponent's advertising, she stated, "“I have no information regarding Ms. Keehn's campaign strategies and advertisement efforts.”

Shouldn't someone be asking Judge Schall what she knows of Keehn's campaign ad destruction? The fact remains, no one is talking about who put pressure on Clear Channel to destroy $14,000 worth of Keehn's ads. If everything was above board, seems the complainant would be coming forward and Clear Channel would have worked with Keehn to edit the pre-paid advertising if deemed appropriate. Not in this article, it was reported by San Diego Free Press on May 12th that the billboard company had input into the final product, including the final text before they were erected. http://sandiegofreepress.org/2014/05/clear-channel-responds-to-political-pressure-quashes-billboard-ads-for-judicial-candidate/ Additionally, all judge work under pressure while deciphering complex problems. It a required ability of the job. Judge Schall can state excuses for prior judicial misconduct, but the fact remains that she has the worst ethics record in the entire state among all judges still on the bench. Typically, a judge with this record would have already been removed from office by the Commission on Judicial Performance. This fact was confirmed by the San Diego Union Tribune on May 12th . http://www.utsandiego.com/news/2014/May/12/judge-admonished-three-times/ As last, but certainly not least. Appointed in 1985, this is the first time Judge Schall has ever had a challenger to her judicial office. Fellow appointed judges have been harassing Keehn and her endorsers since February of this year for Keehn daring to challenge a sitting judge (with a very poor track record). Why? Because if Schall can be removed from office by voter choice, the same could occur to them in the future. The local judges are unethically using this race to back-door advocate for their life time Superior Court judicial appointments by default; and by no voter choice to remove them. This is confirmed by a February 10th email sent from Tom Homann LGBT Law Association President Nicholas Fox to Keehn. Again see San Diego Free Press. The article is titled "Thou Shalt Not Challenge a Sitting Judge" http://sandiegofreepress.org/2014/02/thou-shalt-not-challenge-a-sitting-judge-and-other-legal-oddities/ Judicial Canon 2 states, “A judge shall avoid impropriety and the appearance of impropriety in all of the judge’s activities. B. Use of the Prestige of Judicial Office (2) A judge shall not lend the prestige of judicial office or use the judicial title in any manner, including any oral or written communication, to advance the pecuniary or personal interests of the judge or others.” Judicial Canon 5 states, “A judge or candidate for judicial office shall not engage in political or campaign activity that is inconsistent with the independence, integrity, or impartiality of the judiciary.” Given that campaign tactics on behalf of appointed judge, SCHALL, have raised eyebrows to the point that they have been found newsworthy by several professional journalists*; a reasonable person would conclude that they have given “the appearance of impropriety in their judicial activities” by misuse of “prestige of judicial office” and “judicial title” to “advance the personal interests” of themselves and other appointed “judges”. A reasonable person would conclude that they have given “the appearance” they are “engaged in political and campaign activity that is inconsistent with the independence, integrity, or impartiality of the judiciary”; and have therefore, violated Canons 2, 2.B.(2) and 5. Keehn's destroyed ads accurately stated, "Because no one is above the law, not even judges". Let's hope the San Diego voters help Keehn deliver this message to Schall and the local sitting judges on June 3rd.