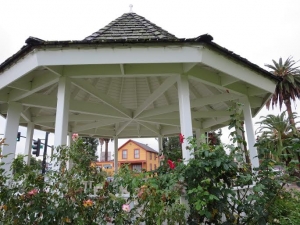 December 14, 2014 (El Cajon )--Judson Park (formerly known as Red Cross Park) is a small place to be sure, yet quite popular for the intimate wedding ceremonies held occasionally at the beautifully crafted white gazebo. The park is located at the corner of Magnolia Avenue and Park Avenue near downtown El LCajon. 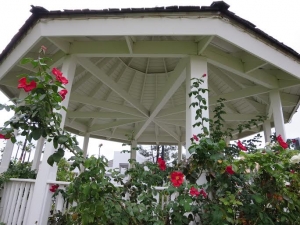 The architectural design is quite interesting, especially when viewed from within.

Created from wood and surrounded by a colorful variety of red and white seasonal roses (planted and maintained by members from the East County Rose Society) it makes for great photo opportunities for amateurs and professionals alike.

Large pine trees provide shade and cooling relief on those hot summer days which El Cajon is known for. A nice grassy area adds to the ambiance of a place made for relaxation.

The area was once owned by C.S. Judson during the 1870’s and eventually granted to the city of El Cajon by the Judson family. The gazebo itself was built by the El Cajon Historical Society with money being donated by several people, including C.S. Judson Jr. and dedicated on July 26, 1992 by the Native Sons of the Golden West Grand President, Harley M. Harty.

Parking in the area is limited though - my advice is to check the lot across the street next to the Knox Hotel for availability and be aware of the ‘no parking’ signs next to the Park.