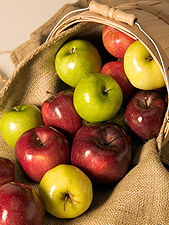 September 14, 2009 (Julian) --Wyatt Earp, the frontier lawman best known for his role in the O.K. corral shootout, judged apple products at San Diego's first County District Fair back in 1889--where Julian's produce won 88 first and second place awards.  In 1909, the town hosted its first Apple Days celebration--and ever since, the historic gold rush town had staked its claim on its real motherlode--juicy home-grown apples and delicious apple pies.  This year marks the 100th anniversary--and a two-day festival will cap off a full two months of celebrating.

As part of Julian’s Apple Days Centennial Celebration,  an Apple Days Festival will be held October 3rd and 4th at Menghini Winery. The Festival features apple displays, music and dancing, an antique tractor display, children’s games and activities gold panning demonstrations, a beer and wine garden, food and merchandise vendors, contests, and, of course, apple pie. The event runs from 10am to 5pm Saturday and Sunday. Admission is $5 for adults, free for children 12 and under.

There will also be a variety of other events throughout the town and surrounding areas during the weekend, including an Oktoberfest at the Rabobank Parking lot on Main Street, the 13th Annual Laguna Mountain Rendezvous in Santa Ysabel, the OId Time Melodrama & Olio performance at Town Hall, wine tours, a Country Market at Wynola Junction Antiques, and entertainment by Julian’s Doves & Desperadoes.

On October 9, 1909, colorful displays of various varieties of apples were set up in Town Hall, there was an all-night dance, free food, some speeches and a baseball game with Ramona. Early events also included foot racing, rooster-pulling on horseback, and fancy riding tricks by individual horsemen. Newspaper accounts estimated the crowd from 200 to 2,000. Subsequent annual celebrations would attract upwards of 45,000 people.

There will be a big raffle on Saturday for the beautiful pen and ink artwork of an old-fashioned apple picking depicted on the Julian Apple Days poster. Tickets for the artwork drawing cost four for $10.00 or ten for $20.00. The coronation for Mr. and Mrs. Apple Days will be also held on Sunday.
Free parking for the Apple Days Festival is available at Menghini Winery, located at the end of Farmer Road, about 2 miles out of downtown Julian. Last year’s festival attracted over 3,000 visitors.
For a full two-month schedule of events and more information, please visit http://www.julianappledays.com.