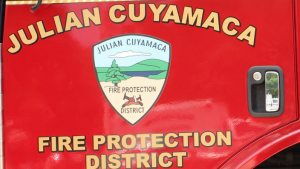 The Julian Volunteer Fire Company, through Attorney Marek Pienkos at the law firm Grady and Associates, has filed a claim alleging violations against free speech, intimidation, threats of retaliation, and other complaints. The volunteer firefighters’ board previously issued a vote of no confidence that it presented to the JCFPD board, which dismissed the matter as unreliable.

In addition, Karen Kiefer, Supervising Paramedic for JCFPD, has filed a sexual harassment claim--among other complaints—through Attorney Jessica Coronado. The complaint alleges that the chief asserted he could “convert” Kiefer, a lesbian, suggesting a sexual relationship.  Her complaint also alleges that he discussed her pay in front of others and improperly banned Kiefer from speaking at board meetings on paramedic-related issues.

The JCFPD Board of Directors asked their legal counsel to do an independent investigation which former board member Patricia Landis claims is “a conflict of interest because legal counsel for JCFPD will be counsel for the defendants in these legal actions.”  Pending a legal investigation involving depositions, affidavits and potentially a trial, Landis proposes, “Chief Marinelli should be placed on administrative leave. If he is found innocent, he will remain Chief. If he is found guilty of these charges he will be fired with cause. This is how our justice system works.”

East County Magazine contacted Chief Marinelli for comments.  He sent the following response via e-mail: “They are actions against the district based on false allegations against me.  I have been requested by our attorney not to comment.  The one comment I will make is the allegations against me are not true.  The volunteer firefighter association is lashing out against me because they feel like I am a threat to the volunteer organization.  They must feel an incredible amount of fear and anxiety to make up such lies against me.   I feel sorry for them and forgive them.  I have always advocated I support the best level of service that can be provided to the public we serve.  It's a unfortunate  not everyone feels that way.  The majority of our staff support me.  These claims are being fabricated from a group of about six out of roughly forty community volunteers and reserve volunteers.”

The fire district has also been involved in a heated dispute over whether to remain independent or join the County Fire Authority. The board majority recently voted to remain independent and is now the only all-volunteer fire department remaining in San Diego County.  Landis has advocated for independence, while board chair Jack Shelver backed joining the CFA.  Advocates of an independent fire district have claimed Marinelli has not done enough to support the majority’s wishes, a claim Marinelli has disputed, as ECM previously reported.

Advocates of an independent district have voiced concerns that the Julian-Cuyamaca area might not be adequately prioritized through a countywide fire department that partners with Cal-Fire if a major fire occurred elsewhere. But opponents contend that not partnering with the county and Cal-Fire puts the communities at greater risk.

The decision to stay independent led to loss of a paramedic engine in January, as ECM reported. Supporters of a stand-alone district are planning a ballot measure in June to ask voters to support a fee hike to support a free-standing district, though opponents claim the amount won’t be enough to fully fund the district’s needs.

You may have read or heard that the Initiative to repeal and replace the benefit fee for JCFPD failed due to insufficient signatures. THIS IS NOT TRUE. The Petitions had more signatures than necessary by people who live in the District and want JCFPD to remain independent. The problem is that 58 of these people have moved and did not update their address with the Registrar of Voters, and these signatures were declared invalid. You might be one of them. You can go online to www.sdvote.com to verify your information. If you need to change your address, you fill out a New Registration Form and check the box at the bottom “I was previously registered or pre-registered to vote.” If you have a P.O. Box, check “My mailing address is different from my home address.” We will repeat the process, publish the Initiative, gather signatures on Petitions and place the Initiative on the November ballot. We will be precise and succeed in this effort now that we know what to look for and how to help. We will continue to fight to keep our dedicated, successful, treasured, unique and historic volunteer fire department.
A comment on the initiative. They actually had a nice cushion of signatures. Evidently there were a couple people who signed twice as there were many petitions out so they had no way of knowing. Sometimes people mean well but dont realize that you can't sign twice. Also, there might have been some sig's that did not match the registered signature. If you registered with a middle initial, you must sign the petition with a middle initial. I was probably rejected for that. This info can be found at http://www2.sdcounty.ca.gov/rov/Eng/Voters.asp Very simple to check. The rejection of the petition was not from lack of support, but rather not understanding how precise the instructions were.
Please Julian, let this play this out in the courts and via normal governance and administrative processes, including the remaining possibility of a November ballot initiative. Serious accusations flying so freely in these comments - a public forum - will ultimately lead to claims of libel and slander, if not actual libel and slander claims. That will not do anything good for Julian. P*ss*ng on each other does nothing for the back country that we all love. You are boiling over, so now is time to turn the heat down and trust the process. With the failure of ballot initiative for a increased fire fee this June, there is way too much uncertainly regarding what *the people* actually want. The failure or success of any effort toward November, which would need to pass even if it can make it onto the ballot in the first place, should bring the most important matter at hand to a closure. Don't turn it into a war that harms the community in broader ways. There is no upside in it. Brett Stalbaum Shelter Valley

I know passions run high.  But accusing a poster here of being someone else, name calling, and accusing people on either side of being liars or engaging in criminal actions should not be done here due to libel concerns and our site rules requiring civility.

I removed an extended post that was also far too long to be readable and filled with unsubstantiated accusations.  I have no way of knowing as editor if these are true or not, and we won't allow potential smears to stay up (unless the person attacked asked to have it remain and respond). If posters have proof of allegations, please provide documentation to me for a potential future article or link to your evidence (such as meeting minutes or court documents) in your posts. Also if  anyone is alleging crimes, please notify law enforcement.

I have also cautioned another poster in an earlier message sent privately on our rules but allowed that earlier post to stay, only because the person he made an apparently false/negative statement about has since posted a rebuttal here and asked that it remain along with her rebuttal and others, to avoid disrupting the conversation by deleting posts that also had many other remarks that added to the conversation without breaking the rules.

Rest assured I am not taking sides.  All sides are entitled to air their views in a robust discussion. But remember, if you think someone engaged in criminal actions, such allegations should be addressed to law enforcement or in a civil suit for a court to determine whether or not laws have been broken; unsubstantiated allegations don't belong on a public forum on a news site.

I have encouraged the poster whose post was removed to revise it and submit a shorter version with her concerns in a less inflammatory manner. If she or anyone has proof of actual wrongdoing I would of course wish to know that, and see the evidence which should be sent via private email so that it can be vetted first and anyone accused of wrongdoing given an opportunity to respond, as is standard journalism procedure.

Everyone on this post lives in the same communities and are neighbors ; I hope we can see respect even if people disagree. We are doing our best to give all sides an opportunity to be included in our articles and have a robust discussion here, but if people continue to violate site rules and make accusations that haven't been substantiated, we will have to close the comments section on this story, which I really don't want to have to do.