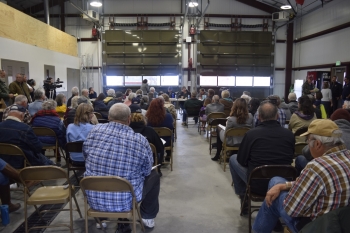 Story and photos by A.J. Herrington

February 13, 2018 (Julian) -- The Board of Directors of the Julian-Cuyamaca Fire Protection District (JCFPD) has voted 3-2 to negotiate fire protection standards for the community with the County of San Diego, if the County takes over that responsibility from the district. Many of the area residents who attended the crowded meeting at Fire Station 56 on Highway 79 today believe it’s the beginning of the end for the last volunteer fire department in the county.

“This is the first step in dissolving the district,” said Mike Hatch, a resident of Julian since 1998 and a volunteer firefighter with the district.

In September of last year, the board voted 4-1 to remain independent of the County Fire Authority run by Cal Fire.

Since then, the County has withdrawn all funding and support for the district, including eliminating a paramedic fire engine. Backers of a ballot measure to raise fire fees and help fund the independent district failed to get enough valid signatures for the June ballot.

Many of those attending the meeting believed the board was planning to vote on dissolution at today’s meeting. Item 14 of the meeting’s agenda was listed as “San Diego County Fire Authority-LAFCO negotiation/application for dissolution.” 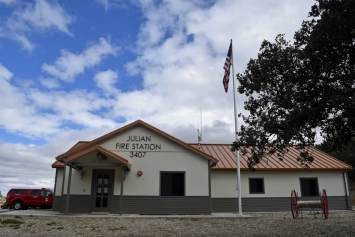 Board President Jack Shelver explained that the body wished to learn what level of fire protection and emergency medical services the county would commit to in the event the JCFPD was dissolved. LAFCO is the San Diego Local Agency Formation Commission, a quasi-legislative body that would oversee dissolution of the district, were it to occur.

During the meeting’s public comment period, emotions often ran high. When the 15 minutes allotted for individuals to address the board ran out, many who hadn’t yet had a chance raised their voices in dissent. The board acquiesced, and everyone who wished to speak was granted the floor for three minutes. A request that another meeting be scheduled in the evening hours to give more people an opportunity to speak was not approved by the board.

Most of those who spoke expressed support for JCFPD to remain independent, noting that the local firefighters know the geography and people of the district better than the CAL FIRE crews that would replace them.

Others said the issue is one of economics and support a county takeover. The JCFPD needs more money to survive and they believe proposed tax assessments on properties in the district to keep it afloat would be too much of a burden on some members the community.

Many people noted the issue has at times turned ugly with name-calling, personal attacks, and allegations of political shenanigans.

Board Vice President Aida Tucker passionately responded to claims of improper communication among members of the board.

“The insinuation that we are doing things illegally behind your backs is ridiculous,” Tucker said.

Supporters of an independent fire district say they won’t give up. An initiative to raise fire protection fees that failed to qualify for the June ballot will be revived in hopes of success in November’s election. Firefighter Hatch noted that a signature-gathering effort was already being organized.

“The battle isn’t over yet,” he said.