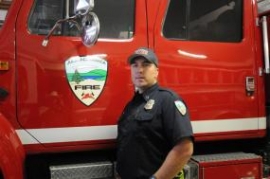 March 10, 2013 (Julian)—Why is the Julian-Cuyamaca Fire Protection District in financial trouble—and why would the District refuse to join the County Fire Authority? Is there a way for the cash-strapped District to retain its independence and assure a swift response time for residents?

These are important questions. The answers reveal a distrust shared by other rural fire departments that have reported longer response times and other concerns after giving up volunteer firefighters to join the County system.

The Fire district operates both a Fire Department and an Emergency Medical Service with a single Advanced Life Support ambulance, staffed by six Paramedics and six Emergency Medical Technicians who work a traditional fire  shift of 24 hours on, 48t hours off. The ambulance service is at the heart of the losses for the district, this year to the tune of $86,335.

According to Captain James Stowers, the Ambulance service has lost money in seven of the last 10 years, and now the Association has had to reach deep into reserves to keep it going.  By contrast, the firefighting  side of the house was in the black by $21,000.

Why is this the case? First, most of the calls that the 911 System gets are not fires, but medical aid calls. While many of those calls could be competently handled by Emergency Medical Technicians (EMTs)  at a lower level of training than a Paramedic, a critical call such as a stroke or a heart attack, or a critical trauma such as crash injuries, require the more advanced training and equipment in the Advanced Life Support ambulance.

This raises two more issues regarding the ambulance. First the standard of care nationwide establishes a 10 minute response as the standard of care. Secondly, with critical trauma calls, the goal is to get a patient to the Trauma Bay within an hour of the incident. This is what is called the golden hour.

A loss of the ambulance program at the fire district will mean 45 minutes for an ambulance to arrive on scene, and another 45 minutes to get back down from the mountain. This is assuming road conditions are good—no snow or ice--and that all goes well, meaning nobody gets lost in the back country roads.

The other choice is the deployment of air ambulances, which will be next to impossible to do during a winter storm. This could prove deadly to critical patients. Plus even with good weather, the cost of operating a helicopter are very high.

The size of the yearly assessment—money coming into the district--is also a key to the crisis, as well as the trend toward a higher volume of medical calls as Paramedic programs have evolved across the nation.

There are reasons for this. The equipment that is carried by these units includes heart monitors and oxymeters, which measure the level of oxygen in the blood. They also include breathing bags and IVs as well as the necessary medications. The ambulance of old that just scooped and hauled  is gone. With higher-tech equipment there are better outcomes and survival rates for patients,  but this is not cheap.

According to Captain Stowers, the residents of the district are willing to hold an election to put before the voters the option to raise yearly assessments. But holding a special election is too costly, so  so the 2014 June Election is the closest time that this can be done. Meanwhile, the District is seeking solutions to cover its shortfall temporarily.

What is the County of San Diego proposing?

The ultimate goal of the County is for the District to be dissolved and for it to be absorbed into the County Fire Authority.

The County has been trying to form a County Fire Department, where the County would handle the administrative end and have Cal-Fire handle operations. In theory, this could allow for better unified command, especially in a major emergency, such as a wild land fire. The problem is that what the County is actually proposing is penny wise and pound foolish, some fire officials warn. In fact, this is why the County Fire Authority failed in the 1970s, according to Stowers.

The first thing the County is proposing is to help the District  by taking up the costs of Julian’s ambulance service this year. This means that for fiscal year 2013 the service would be in the black. If the District agrees, next year the service would be dissolved, with the ambulance program cancelled.  With ambulances coming from much farther away to an area that regularly receives snow, this will likely ultimately cost lives.

The second part of the proposal is just as baffling. Right now between the Cuyamaca and Julian Stations the Department can field three engines, with almost a full strike team. (A strike team has 12 personnel.)  Each engine is manned by two firefighters and an officer. The way the County is proposing the changes, it would take an engine off line, leaving only two engines, one per station—not enough to form a strike team.

Julian is considered at high risk for a wildfire. This is according to Cal Fire. http://cdfdata.fire.ca.gov/fire_er/fpp_planning_car?filter_field=place_name&filter_start=J

Hence, taking an engine out of service will take people off the initial response, which could lead to a major emergency, when a stronger initial response might stop a fire in the early stages before it explodes. With this will come higher insurance rates for district residents.  It goes without saying that it will also place firefighters at a higher risk of being overrun by fires, leading to more injuries and deaths.

Moreover, Cal Fire is also proposing to have a Battalion Chief to serve as ad hoc  Chief of the Julian Fire Department, and for the Department to stop looking for a new Chief. Right now they are without one.

The County is also threatening, according to Stowers, to make the Department pay for its own communications and dispatch fees with the 911 system. This will send the fire service into the red. It could also put at risk the unified command structure we have right now.

The Department has also been warned by other fire chiefs in rural districts that they are unhappy with the County Fire Authority, partly due to reduced service to their communities.

In a straw poll of attendees at a meeting in Julian on the 28th , the County proposal was rejected outright.

Right now the Julian-Cuyamaca Fire Protection District Board of Directors and Board President Jack Shevler is aware that the numbers do not make any sense. They are willing to do the following.

First, have an election to raise the fire assessment. Keeping it at the 1980s $50 per year level is unsustainable.

Second, according to Stowers they are looking into fundraising efforts and local merchants have offered to hold fundraising days at local restaurants. This is a stopgap and will help until the election.

Third: The Department is looking into selling some equipment that will in no way affect the response ability. This is older equipment.

Fourth: EMS personnel have agreed to a 20% pay cut.

Fifth: The Department is looking at hiring a part time Chief, and reducing the hours for the Department Secretary from four to three days a week.

Finally the County is coming back to Julian on March 14 with a new proposal, since at the meeting on February 28, residents mostly rejected the County’s proposal, in particular dissolving the ambulance service.  This meeting will happen at the Women’s Club at C Street at 9:00  in the morning.

You must fight to keep your Fire Department. I have 11 years experience with a rural volunteer fire department. I have been through all the promises from the County and they have kept few of them. The problem 5 years ago was not enough trained firefighters. The problem today is not enough trained firefighters. The Campo Volunteers will have at least 20 days this month dark, no firefighters. In the County "pool" of 500 volunteers they cannot provide firefighters who want to come to Campo. Imagine what will happen if they take over Julian, further out than Campo.

Do not believe the stories from the County.

They are not required by State law to provide fire protection and you better believe they will not.

A paper fire authority does not a fire department make.