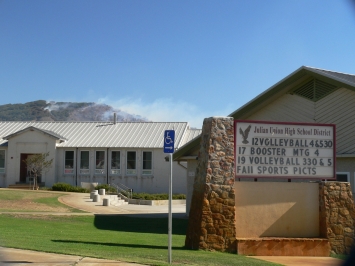 February 3, 2018 (Julian) –  The San Diego County Registrar of Voters Michael Vu, in a letter to Patricia Landis, has advised that a proposed ballot measure to raise fees to $200 in the Julian-Cuyamaca Fire Protection District had only 191 valid signatures—34 signatures short of the 225 needed to qualify.

Applicants submitted 268 signatures, but 77 were deemed invalid, including seven duplicates.

The announcements comes as a serious blow to backers of keeping the district independent. The Julian-Cuyamaca Fire Protection District board majority recently voted against joining the County Fire Authority run by Cal-Fire, and in response the County and Cal-Fire have eliminated resources for the district, including a County Fire paramedic fire engine, raising safety concerns.

The JCFPD board is set to meet on February 13th, when a proposal to rescind the earlier independence vote and join with the County Fire Department is expected to be raised.

Patricia Landis, a backer of the ballot measure, has advised ECM that she and Brian Kramer will be visiting the Registrar’s office this week to review the petitions. “We will decide if we can appeal, and if not, we will try again in November. If the Board decides to re-vote and go with the County, we will file a Petition to reverse the decision.”

On the Facebook page “Save County Fire in Julian” run by supporters of returning the district to County and Cal-Fire control, the group posted the opinion that the initiative “likely would have failed” to win voters’ approval if it had qualified for the ballot.

“We respect the proponents passion, however it is time to sit down and come to a resolve that provides improved regional cooperative fire protection for the Julian-Cuyamaca area,” the post concludes.

The group says the Julian Cal Fire station is set to close Feb. 5th and reopen most likely in spring, which could delay response times and also force citizens who seek burn permits to travel to Warner Springs or Witch Creek stations. The district will be served by its volunteer firefighters in the interim.

Both sides have some members accusing others of dirty politics and even potentially criminal actions.

A website supporting the JCFD  has been hacked, an action that Heather Dawn, a supporter of an independent fire district, suggests could be “Sabotage.”

She forwarded a note from the site administrator which confirms the site was hacked. The administrator states, “Don’t visit for the time being. It looks like it’s also spreading malicious software…This was no script kiddy. This was a very sophisticated and sustained attack. I seldom see these kinds of hacks and it was done by a professional.” The administrator added that loss of information on the site was a possibility.

Landis, however, says that she hasn’t bought into the conspiracy theory. “Yes, we have some creepy opponents but we have no evidence the County or its supporters have hacked our websites,” she told ECM in an e-mail.  She added that her husband, a PhD in computer science, indicates it could be a temporary DNS redirect that timed out or was overwritten by official DNS providers. Landis says she has now accessed the site after the hack without a problem.

But Landis adds that the County and Cal Fire are “hovering like vultures, looking for an opportunity to intervene. I am totally perplexed as to why they are so desperate to take over JCFPD. That is the real question.”

Both sides contend that they have the community’s safety at stake. The County has taken an all-or-nothing approach, insisting that unless the long-time volunteer fire department formerly provided county funds officially joins the County Fire Department, 100 percent of county money and resources won’t be provided in the future.  Just why the County has adamantly opposed any compromise is not clear.

Conversely, opponents of joining the CFA recall the Laguna Fire era in the ‘70s, when the County withdrew from providing firefighting services, an action that gave rise to formation of the volunteer firefighting departments.

The County in recent years formed its County Fire Authority staffed by Cal Firefighters and has been eliminating volunteer departments, pushing them to be absorbed into the CFA.  Yet the County inexplicably has never added fire services to its County Charter – an omission that leaves those with long memories in the backcountry uneasy.

All volunteer agencies in the county are now gone, except for Julian-Cuyamaca, the lone hold-out remaining independent.

A supporter of independence posting as LCJulian under a recent article on our website says she and her husband, a volunteer firefighter, “care about the safety of our community.”  She voiced offense that opponents of the ballot initiative have tried to suggest bias on her part because her shop has provided T-shirts to volunteer firefighters.

She observes, “County Fire Authority is not a fire department. It is merely a line item that could be deleted at any time.”

She predicts that if the County succeeds in taking over Julian-Cuyamaca Fire Protection District’s assets, “As soon as they dissolve us and absorb all of our assets which h is $6,000,000+, they will leave like they did before.”

A review of the Petition Signatures for the Initiative to raise the benefit fee for JCFPD revealed that 58 signatures were by residents of Julian, but they listed their current address which did not match the one listed with the Registrar of Voters. This is an easy mistake because 80% of the residents use a Post Office Box on their DMV license and for mail. When they move, they do not think to notify DMV or the Registrar, because they keep the same P.O. Box. This is unique to Julian. We know the issues. We will repeat the Petition process. The Initiative will be published in the February 15 issue of the Union Tribune and we will begin collecting signatures again. This time, we even have a list of all the registered voters and can double-check before handing in the Petitions. THIS INITIATIVE WILL BE ON THE NOVEMBER 2018 BALLOT. Since notifying the community of the status of the Initiative, numerous residents have come forward and asked to help with the Petitions. These are residents who attended meetings and signed the Petition, and now they want to do more. More people than ever are voicing their desire for JCFPD to remain independent. One volunteer asked the Pastor for permission to gather signatures at her church. They are offering more ideas for fundraising to backfill the subsidy the County has removed. This is a ground swell, a backcountry wave, and we will prevail.