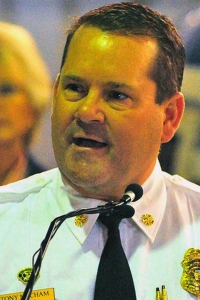 Although the volunteers’ attorney, Cory Briggs, filed an appeal right after the decision, CAL FIRE ignored the order and proceeded with a County takeover of the building on June 1.

San Diego County Fire Authority and CAL FIRE chief Tony Mecham made a court declaration on May 28 which was submitted to San Diego Superior Court Judge Randa Trapp. (The declaration is signed “I am the Unit and County Fire Chief for the County. I have personal knowledge of the matters set forth in this declaration and, if called upon as a witness, could and would testify” and declared under the “penalty of perjury.”).

Mecham says a County Parks & Recreation employee asked a friend to drive him to the station because he was experiencing chest pains. The friend was reportedly not aware that the station was not officially in operation.

After the pair arrived at Julian Fire Station No. 56, Julian Fire volunteer Rachel Goddard evaluated the individual. “Despite there being no paramedics on site and Ms. Goddard not even being a licensed EMT, none of the individuals at Station 56 called 911 or alerted the County or CAL FIRE to the situation,” Mecham later said in a declaration. “This incident gives me great concern as the continued occupation of Station 56 by plaintiffs and others acting on their behalf present a health and safety risk to the public.”

Mecham continued, “Because plaintiffs have not reported any incidents to the county or Cal Fire, I do not know how many other times this may have happened.”

Mecham earlier claimed in an April 9 declaration signed under the penalty of perjury that “since this process first began over a year ago, emotions have been high and there have been threats of violence against County firefighters and property, and non-compliance by JCFPD staff with certain matters to effectuate a smooth transition.”

Neither Mecham or the county have ever offered official conclusive proof of these claims, which Goddard and others with the JCFPD have contended are hearsay.

In the same declaration, Mecham stated, “I am concerned that if Plaintiffs continue in possession of the former JCFPD equipment and other assets, that equipment will be lost, stolen, dissipated, or otherwise harmed . . . With people locking themselves in the station and tensions running high, I am concerned that equipment will be damaged or stolen,” words which were later tamped down by Senior County Counsel Joshua Heinlein.

Emotions ran high between the JCFPD’s attorney, Cory Briggs, and Heinlein when the statement came up during the court hearing which caused Judge Trapp to intervene and urge all parties to “tone down the rhetoric.”

“But this incident shows that it is easy for the public, including county employees not involved in the litigation, to be confused regarding whether or not Station 56 is an operating fire station and whether or not the individuals occupying the station are qualified to provide medical treatment,” Mecham stated.

But what Mecham claims in the declaration does not mesh with reality, says the former JCFPD volunteer. 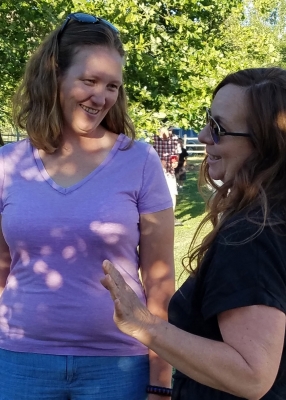 Goddard disputes Mecham’s story, saying he got it wrong and has used the incident to bolster the county’s and CAL FIRE’s position in the continuing legal dispute between the County Fire Authority/CAL FIRE and the dissolved Julian Cuyamaca Fire Protection District.

She tells East County Magazine that local resident and a Registered Nurse, Heather, came to drop off food while it was being occupied by the JCFPD volunteers. (Note: Heather's last name has been removed to protect her safety, due to a threat she received .)

“When she came in the door she told me, `A county parks truck is in the parking lot.’ I saw two county parks employees in a truck parked in the station parking lot. They sat in the truck for a bit and only then decided to walk to the front door. I was there to greet them,” Goddard recalls.

According to information supplied to ECM by the County, the individual has been identified as Parks and Recreation worker and Julian resident, Brandon Williams, 25, who was driven to the firehouse by his supervisor, Mark McGraw.

The younger of the two males told Goddard that he was having pain in his chest at which time he was ushered to a seat. The other male, identified as a supervisor, stayed in the truck.

“I’ll be right back, my EMT is in the other room,” Goddard said.

After summoning JCFPD Michael Oakley, both Goddard and Heather returned to the individual. “My EMT was talking to the patient as I got the medical bags,” she says.

As Oakley took a blood pressure from the individual, Heather says she explained to the patient that they could render assistance to him by calling an ambulance—not providing medical care onsite. But when he was directly asked whether he wanted an ambulance by Goddard, the individual said “No, I’m not sure if my insurance will cover it ‘cause this didn’t really happen at work,” according to Goddard.

The individual continued, “I felt sick last night, had a cough. So this morning I took some DayQuil hoping to fight off whatever I had or have.”  Heather explained to the patient that the fire station was officially closed, “but if you want us to call for an ambulance to respond, they can. They are just 5 minutes down the road.”

The individual refused to have an ambulance summoned, Goddard maintains.

Goddard told ECM, “My EMT, the nurse and I checked on him at his request and repeatedly told him that we could call an ambulance. The patient didn’t want an ambulance, and that is his right to decline. We advised him that he should get checked out by his doctor to make sure everything was OK.”

“The patient left the fire station without help with his supervisor in the County Parks work truck,” Goddard said.

Based on the assumed veracity of Mecham’s declaration, Judge Trapp ordered the volunteers inside of Julian Station No. 56 to immediately vacate the premises.

In her ruling, Trapp said, “Individuals…basically taking the station and the equipment that belongs to it hostage is not status quo. It is inappropriate and with some of the recent activities they are creating a danger to the health and well-being of the citizens by continuing with the situation and putting lives at risk and subjecting at least the county for liability for actions taken by those individuals who are holed up in the department.”

Although Goddard openly acknowledges that she was not currently licensed as an EMT, Mecham failed to note that a licensed registered nurse takes precedence in a medical line of authority. According to several first responder sources, the presence of a registered nurse is over and above that of an EMT and paramedic. Both Goddard, who was recently certified as a “fire engineer” and Heather currently have what is referred to a “Title 22” or “Emergency Medical Responder” first responder certification.

Such a certification means that an individual has basic first aid skills, CPR for healthcare providers (a little more involved version than the standard CPR), and some training in treating patients in a professional emergency capacity. In short, the goal is to save lives by providing immediate aid and interventions for patients before the arrival of emergency medical technicians or paramedics.

Because the individual was not admitted to a doctor’s office or health care facility, federal Health Information Protection Act (HIPA) laws do not apply.

East County Magazine made multiple unsuccessful attempts to contact paramedic Oakley and the two County of San Diego employees who were identified as attempting to get medical assistance at Station No. 56.

When ECM attempted to contact Mecham for a comment, he responded in an e-mail saying, in part, “You are welcome to file public records requests, but as I have stated repeatedly, we will have no public comment from our staff regarding Julian while we remain in the Court Process. We respect the authority and direction provided by the judge and will await a final resolution in the courts. At the conclusion of the court process, I would be glad to issue a commentary.”

ECM reached out to Steven Schmidt, Communications Advisor to County Supervisor Dianne Jacob, the architect of the county’s program to consolidate the volunteer fire districts and Chair of the Board of Supervisors. He referred all comment to the County Fire Authority/CAL FIRE.

The County’s Director of County Communications Office, Michael Workman, says, “These matters will be decided in a court of law, not in the press.”

But his subordinate, Alex Bell, Group Communications Officer of the County’s Public Safety group, fired back in an e-mail, “the only statement we will provide addressing your claim is: “The County does not comment on fabrications.”