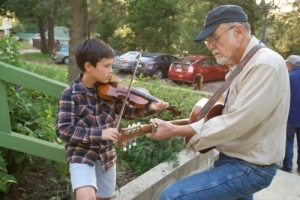 February 15, 2018 (Julian) -- The Julian Family Fiddle Camp (JFFC) received a grant from the International Bluegrass Music Association Foundation (IBMA) the first week of February for its dedication and contribution to sustaining acoustic music in the local community.

The IBMA was founded some 30 years ago with a mission of honoring the acoustic bluegrass music tradition, while encouraging innovation and facilitating connection and support of the bluegrass community worldwide. In 2007 it created a foundation that, through inviting and reviewing applications from across the US, would select and help fund projects it found most innovative and effective in advancing the art form.

Of the many applications from across the country submitted for funding in 2018, the one sent in to the IBMA Foundation by the Julian Family Fiddle Camp (JFFC) stood out and, after thorough review, was recently announced as one of nine to be funded this year.

JFFC was founded seven years ago by Avery Ellisman, an Encinitas resident and local musician. Partnered with the San Diego Folk Heritage, Ellisman sought and gained involvement in the camp by some of the country’s top fiddlers, guitarists, mandolin players and banjo players, and has produced the camp annually each April. “From a small camp with five instructors and 40 forty attendees, JFFC has grown to attract people worldwide, with over a dozen nationally-­acclaimed instructors and one hundred attendees expected again this April,” said Ellisman.

He adds, “The grant from the IBMA Foundation is acknowledgement not only of the hard work that’s gone into building JFFC, but recognition that we’re truly helping advance people’s involvement in the playing of acoustic music. Their grant is earmarked specifically to help us pay a part of the cost for bringing out National Guitar Champ, Tyler Grant, and National Mandolin Champ, Jordan Ramsey, as JFFC 2018 instructors.”

JFFC helps people develop a lifelong skill, while connecting people them with likeminded musicians from all around the world. The 2018 Julian Family Fiddle Camp will be held April 11-­15 in Julian, CA. All ages and levels welcome. For more information, please visit www.familyfiddlecamp.com.