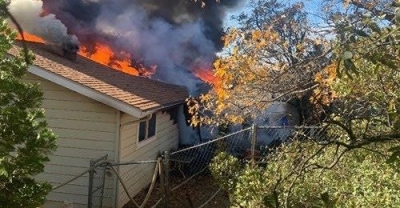 December 14, 2020 (Julian) – A GoFundMe page has been set up by Julian community members to help the Lares family members, who lost everything in a fire at their home yesterday.

“Perla Lares, a Senior at Julian High School served as Teen Miss Julian Princess in 2018 and 2019, dedicating many hours to community service for Julian and San Diego County.  Her brother, Gabe, is a Freshman at Julian High School,” says Jill Fleming, who started the fundraising page.

The site adds, “The fire completely destroyed the home.  The home was rented by the family and there was no insurance. There was no time to retrieve any valuables etc.   None of the family was injured but the family cats and chickens did not survive.  Especially as Christmas is just weeks away,  this single income family,  needs our help!  Donations of ANY amount are gratefully accepted to help the family recover from this devastating loss.  We want to help them with the immediate need of basic necessities of clothing, food and rent.”

On Facebook, Cathy Scott said the family of six lost “all of their belongings including Christmas gifts and their children's school online tablets” in the fire.

Cal-Fire/County Fire Department, which took over fire services last year from Julian’s volunteer fire department, responded to the blaze and prevented it from spreading to other structures.

But Loralei Van Bretton, a long-time supporter of the dissolved volunteer fire department, raised questions over whether the home might have been saved.  “It’s confounding that Cal Fire/County of San Diego had to wait for a water tender reported to come from Palomar Mountain. A brush rig arrived at the fire with no water, no hoses, no ladder,” she wrote on Facebook. “Support for the fire came from outside of Julian. A water hydrant was near, but was refused as they were reported to be waiting on the water tender,” she stated.

The former volunteer fire department had five to six pieces of equipment stationed in Julian, capable of responding to emergencies at any one time, depending on staffing. At the time of dissolution, there were over 60 trained volunteers.  The community narrowly voted to dissolve the district and turnover firefighting to Cal Fire/County Fire Authority after the County refused to continue funding the volunteer fire department beloved by many in the mountain community, as part of the County’s consolidation of firefighting countywide.

Many opposed to the consolidation in Julian have long voiced fears that equipment could be coming from too far away, potentially resulting in loss of homes or lives.

ECM has contacted Cal Fire to request the cause of the fire and documentation regarding equipment dispatched and response times.