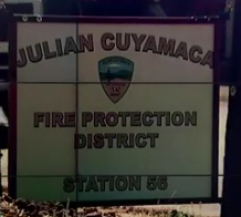 May 31, 2018 (Julian) – The only on-duty firefighter authorized to drive a firetruck in Julian was placed on leave yesterday after a heated argument with the chief, ECM news partner 10 News reports.

Rick Marinelli, the departing Chief of the Julian-Cuyamaca Volunteer Fire District in process of being taken over by the County Fire Department run by Cal Fire, reportedly ordered Captain Dave Southcott escorted off the property by law enforcement. Firefighters told 10 News that Marinelli placed Southcutt and Battalion Chief Mike Van Bibber on administration leave this week.

But no one else authorized to drive a fire truck was slated to work yesterday or today, leaving the public vulnerable should an emergency occur, firefighters told 10 News.

Southcott, on video, called Marinelli a “weasel” and accused him of undermining the department. Marinelli did not respond to 10 News efforts to reach him for comment.

The clash stems from long-standing opposition by Julian’s volunteer firefighters and a vocal segment of the Julian community opposed to a county takeover of the fire department.  Critics contend non-local firefighters don’t know the roads, that the financial situation is not dire enough to warrant a takeover, and most importantly that they fear potential cuts in staffing or mutual aid could put the safety of residents and tourists in the Julian-Cuyamaca area at risk.

Residents are working on multiple fronts to attempt to block the takeover from being completed, multiple sources have told ECM.  The County however has contended that consolidation of rural departments would improve fire protection and resources for communities.

At least on Wednesday and Thursday of this week, however, that seemed not to be the case.

On Friday, a new Chief, Jeremi Roesler, will take over the helm from retiring Chief Marinelli, putting a new leader in the hot seat.

Patricia Landis, a resident opposed to the takeover, voiced concern another concern.  "The Julian Fire Plugs constructed a beautiful Donor Tree that sits in the lobby of the new Julian Fire Station. The actual piece of art cost a few thousand dollar," she wrote in an email today to ECM. "But the priceless aspect is the many leaves on the tree that acknowledge donations of $250 or more, and apples recognizing very large donations, from residents, property owners and businesses who support our independent volunteer fire department. We are concerned about this asset because CalFire eliminated all of the memorabilia from the Intermountain Fire Station when the County took over that location." She added that donations also provided furnishings and kitchenware that she is concerned could be disposed of by theinterim CalFire chief.

As for the takeover, Landis says, "The County and CalFire are acting as if this is a done deal, but it is not. LAFCO is the only agency that can dissolve JCFPD. Volunteers have accumulated over 300 petition signatures, twice. The first was to place an Initiative to Raise the Benefit Fee for JCFPD from $50/yr to $200/yr. The second was for a Referendum to force a vote on the Fire Board's decision to dissolve."

Next up, she disclosed, "We are amassing volunteers to collect signatures from 50% of the registered voters in JCFPD for a LAFCO Protest Petition." If  successful, she says, "This will stop all proceedings and insure JCFPD remains independent."

Landis contends that the Initiative would provide sufficient revenue to sustain JCFPD and raise the level of services, a point that Marinelli has in the past disputed.

More changes are in the works. "The November elections will also replace two Board members who voted to dissolve JCFPD; and, the new Board will be dedicated to maintaining our historic volunteer department," Landis predicts, though voters will have the final say on whether to retain their fire board members, or give them the boot.

For more on the controversies, see http://www.eastcountymagazine.org/julian-firefight-new-chief-faces-lawsuits-protests-over-county-hostile-takeover.