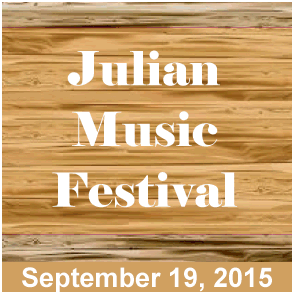 September 12, 2015 (Julian)--If you are looking to have a good time and share your love of music with others, then come to Julian and celebrate the arrival of fall at the 46th Julian Music Festival.

The 2015 festival has a myriad of musical genres like Latin jazz, adult contemporary, alternative folk and more.

Along with a wide variety of music and music acts, on September 19, The Julian Music Festival celebrates its 46th anniversary with a new event beneficiary, as announced by Terry Cox Productions, the event organizer.

The gates will open at noon at Menghini Winery, which is located at 1150 Julian Orchards Drive in Julian. The festival itself goes from 1 to 6:30 p.m.

One of the performers will be an Escondido-based group, Lacemakers, women who mix the sounds of Appalachia, Ireland, Scotland and the sound of the blue hills of Kentucky returning after a two-year absence from the festival.

Next is Natalie Gelman, an alternative folk singer as well as songwriter from “The Big Apple,” this will be her first performing. Currently based in Southern California, Gelman has been compared to a few famous female musicians, Sheryl Crow, Jewel and Joni Mitchell.

Abrakadabra will also be performing for the first time at the festival, they are a high-energy group. They also perform many kinds of music, such Latin jax, island, funk, reggae, pop and rock.

Another group named Trails and Rails will be coming back to perform a combination of Western and folk music, according to Cox.

“The festival is billed as an end of summer celebration with music, family and friends,” says Cox. “We work to line up musical acts that can be enjoyed by a variety of people of all ages. Mix the music with the spectacular beauty of San Diego County’s backcountry and you have a day not soon to be forgotten.”

The venue for the festival is located just three miles north of downtown Julian, in the foothills of Volcan Mountain and has apple orchards all around plus Menghini Winery’s six-acre vineyard.

“We are also excited to announce that the California Wolf Center will be the festival’s official beneficiary this year,” says Cox.

The California Wolf Center, which is based in Julian, their mission is recover wild wolves in suitable habitats and ensure favorable coexistence through education, research and conservation initiatives. The CWC is the lone wolf center specifically for recovering wolves in California as they are a leader in California’s wolf recolonization efforts. The CWC organization plays an important role in Mexican gray wolf recovery as a breeding and host center for this vitally endangered animal.

For tickets and more information regarding the Julian Music Festival, visit www.julianmusicfestival.com.