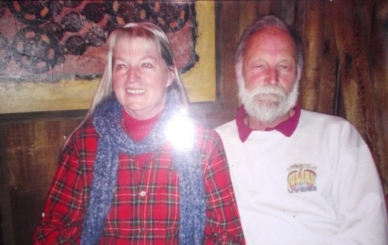 July 17, 2021 (Julian) – For the past 37 years, the Julian News has been the voice of Julian, a historic gold-mining town in San Diego’s mountain region.  Michael Hart and his wife, Michele Harvey, have owned and run the independent weekly publication since July 4, 2004, covering everything from major firestorms to community events.

But now the future of the town’s only print newspaper is in peril. Michael Hart is battling brain and lung cancer.  Due to his health issues, the couple has put the newspaper they love up for sale in hopes of finding someone to keep journalism alive in Julian.

But so far, no serious offers have been received, Harvey told ECM in a phone interview.

“Mike does about 80 to 90 percent of the paper,” says Harvey, who authors a column which this week featured the couple’s 17th anniversary of operating the Julian News.

“It’s a wonderful little community,” Harvey says of Julian. The newspaper also serves other areas in the San Diego County’s backcountry mountain areas, such as Ramona and Ranchita.

The newspaper was founded in 1984 by Buzz Thom, who sold it to Fredericka Foster, daughter of a newspaperman in Imperial Valley. Foster in turn sold off the publication to Michael Carr after she was diagnosed with cancer, Harvey said.  Then on Independence Day in 2004, Hart and Harvey acquired the newspaper.

“Mike wanted to own his own radio station, but there wasn’t one for sale,” Harvey recalls, adding that the price of a station would have likely been unaffordable. “So we bought the newspaper, and we’re really glad we did.”

When Harvey and Hart bought the newspaper, they learned that bias is often in the eye of the beholder. Readers queried Hart about his editorial angle, with some accusing the prior owner of both a right-wing and left-wing slant. What they’ve aspired to, according to Harvey, is to cover all sides.

They took some heat over coverage of County Fire taking control of Julian’s long-time volunteer fire department, but Harvey insists, “What we were actually doing was being unbiased.” She adds that when it comes to letters to the editor, “We publish all letters we receive, as long as they are factual and don’t slander or libel both sides.”

The newspaper has covered some milestones in the community, including keeping readers informed during the devastating Witch Creek Fire that ravaged the region in 2007 and made worldwide news.  But it’s also covered hyper-local news, including publishing photos of every graduating high school senior, covering the recent fire that destroyed the Ranchita Market, and celebrating the town’s sesquicentennial.

Hart was too weak to speak with ECM during the interview, though Harvey says he’s shown improvement. He is receiving treatment at the  Morris Cancer Center at UCSD Medical Center.  “He is getting good treatment…it gives us a lot of hope,” says Harvey, her voice breaking up as she contemplates the future. Her husband used to work around 80 hours a week. “He can’t do it now,” she says. 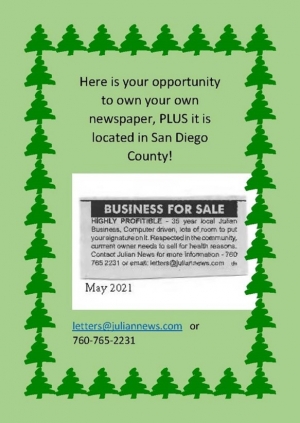 The publication missed two issues and has published more content from third-party sources in recent weeks. The website hasn’t been updated since May and the paper has suspended accepting legal notices for publication due to the uncertainties.  But Harvey resolves, “We’re still there.”

The couple is asking $300,000 for the newspaper, which a for sale ad lists as “highly profitable” even after a year of pandemic lockdowns kept tourists, the lifeblood of Julian away.

The newspaper is distributed weekly to subscribers and in boxes around Julian, as well as at outlets such as markets, restaurants, and the Julian Chamber of Commerce.

Harvey reflects on the couple’s 17 years of reporting community news.

“We’ve absolutely loved it,” she says wistfully. “We wish we could do it for the rest of our lives.”

A GoFundMe account has been set up to help Hart in his battle with cancer.