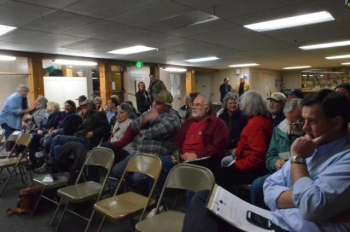 January 14, 2014 (Julian) --The Julian Planning Group voted unanimously Monday night to recommend denial of the Calico Ranch Solar Project, which proposed to cover 8.5 acres in Wynola with 4.,660 massive solar panels, requiring the destruction of numerous mature oak trees. The reasons given by the Planning Group were summarized as follows:

They were voting to reflect the wishes of their constituents, who are opposed to the project. Second, the project does not fit the Julian Community Plan.Third, the description of the project given to the County by the Applicant, ECOS Energy, is incomplete.The final factor was the apparent loss of biological resources, encompassing both native flora and fauna.

The project is a one-megawatt facility to be placed in what the company inaccurately called a vacant lot by Calico Ranch Road. The facility, once approved, should take three to five months build. According to Wilson, the project would sell energy to San Diego Gas and Electric, but would stay in a single circuit and will power 650 houses.  According to Wilson the proposed project to the County is the worst case scenario (8.5 acres); the finished project could be as small as three acres.

During public comment one of the residents suggested that perhaps less impact would be done if the company just puts roof top solar on the same number of homes. The crowd applauded.

According to Barbara Nigro, a Julian resident who lives down the hill from the proposed development,  “They will be cutting hundreds of old oak trees, hundreds and hundreds of manzanita trees, and there are huge boulders there.”  She also told East County Magazine that the project would use chemicals to kill the current plant life and clear the area. She is concerned about the run off into her property, as well as the quality of life and property values being degraded.

Other residents shared Nigro’s concerns and spoke to the destruction of habitat as well as the incompatibility of this project with Julian’s character.

David Sibbet, County Representative on land use, explained that the County already identified some important issues as the process moves forward. The land though, which the applicant identified as vacant, has oak trees and non native grasses, among other plant life.

He later also spoke to the need of the applicant to also do the studies necessary, including archeological, cultural, and biological. Moreover, the applicant would have to mitigate by replacing at a ration of 3:1 the environment destroyed during the project with similar lands protected from development. The preference for the county is to have that replaced in the actual zone, but the county is running out of parcels to do this.

Art Cole started his testimony by telling the applicant that “I support solar.” Yet he went on to tell the applicant and the board that part of the road leading to the development site will run through his property.” He also emphasized that there are many native species on the ground, some endangered, and then pointed out that the fungus environment is also critical for tree survival up to 1,000 feet. So he expects mature trees to die within 20 years.

Pat Landis presented the board with the 2002 compact of all the neighbors that maintain the country lane that runs through that area. Landis emphasized that this narrow road also has mature apple trees on both sides and on the center. So they would have to be removed to widen the road to bring in the equipment. The small bridge was built by the residents and was not meant for heavy traffic.

Lisa Elkins stated, “This is out of character for our historic community.”

The planning group vote is advisory and ultimately County Supervisors have the final say on whether or not the project will proceed. One  resident voiced a concern that it really does not matter what the Planning Board recommends, or what the community wants. As he put it, it will be another four to one vote at the County Board of Supervisors, like at Ramona.

In the end, after almost two hours, and getting a clarification from staff that the Board could have a second bite at the apple if the applicant revises the project, they voted to recommend against it. The County also has an extensive scoping letter where a lot is being asked from the applicant.

It is also clear that as SDG&E aims to meet state mandates for utilities to provide power from green sources, we will see an increasing number of these projects proposed in the backcountry.

The situation raises a perplexing question:  is a project really green if it proposes to cut down mature oak trees in an area that’s already lost over 12,000 oak trees to oak boring beetles and even more to the wildfires that have devastated this region?

There goes another beautiful back country neighborhood under the disguise of "green energy"!

Oh, so the folks in Julian decided they won't have their backyard industrialized by some glad-handing, huckster from out of state?!  Gee, what a surprise. Let's just hope and pray that their decision isn't overidden by the county supervisors, most of whom--Roberts, Roberts, Cox, and Horn--have already proven themselves to be little more than shills for the "renewable" industry.